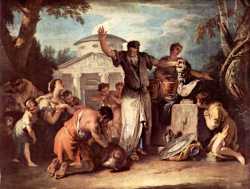 It is remarked in the article on satyrs, that the older satyrs were generally termed sileni,1 but one of these sileni is commonly the Silenus, who always acts a prominent part in the retinue of Dionysus, from whom he is inseparable, and whom he is said to have brought up and instructed.2

Like the other satyrs he is called a son of Hermes,3 but others call him a son of Pan by a nymph, or of Gaea.4 Being the constant companion of Dionysus, he is, like the god, said to have been born at Nysa,5 and Diodorus6 even represents him as king of Nysa; he moreover took part in the contest with the Gigantes, and slew Enceladus, putting the others to flight by the braying of his ass.7

He is described as a jovial old man, with a bald head, a puck nose, fat and round like his wine bag, which he always carried with him, and generally as intoxicated. As therefore he cannot trust to his own legs, he is generally riding on an ass,8 or he is supported by other satyrs and satyrisci.9 In every other respect he is described as resembling his brethren in the fondness for sleep, wine and music. He is mentioned along with Marsyas and Olympus as the inventor of the flute which he is often seen playing,10 and a special kind of dance was called after him Silenus, while he himself is designated as the dancer.11

But it is a peculiar feature in his character that he was conceived also as an inspired prophet, who knew all the past and the most distant future,12 and as a sage who despised all the gifts of fortune;13 so that he becomes the representative of that wisdom which conceals itself behind a rough and uncouth external appearance, whence he is likened to Socrates.14 When he was drunk and asleep, he was in the power of mortals who might compel him to prophesy and sing by surrounding him with chains of flowers.15

Silenus had a temple at Elis, where Methe (Drunkenness) stood by his side handing him a cup of wine.

He is represented as a fat, bald, jovial old man riding an ass, and always drunk. Some sculptures however represent him as a dignified, powerful man, the noble guardian of the infant Dionysus, such as a statue at the Louvre.