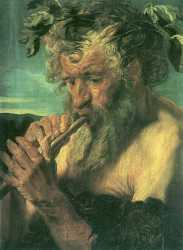 The name of a class of beings in Greek mythology, who are inseparably connected with the worship of Dionysus, and represent the luxuriant vital powers of nature. In their appearance they somewhat resembled goats or rams, whence many ancients believed that the word σάτυρος (satyros) was identical with τίτυρος (tityros), a ram.1 Homer does not mention any satyr, while Hesiod2 speaks of them in the plural and describes them as a race good for nothing and unfit for work, and in a passage quoted by Strabo3 he states that the satyrs, nymphs and Curetes were the children of the five daughters of Hecaterus and the daughter of Phoroneus. The more common statement is that the satyrs were the sons of Hermes and Iphthime,4 or of the naiades;5 Silen also calls them his own sons.6

The appearance of the Satyrs is described by later writers as robust, and rough, though with various modifications, but their general features are as follows: the hair is bristly, the nose round and somewhat turned upwards, the ears pointed at the top like those of animals (whence they are sometimes called θῆρες (thēres);7 they generally have little horns, or at least two hornlike protuberances (φήρεα, phērea), and at or near the end of the back there appears a little tail like that of a horse or a goat. In works of art they were represented at different stages of life; the older ones, commonly called silens or sileni,8 usually have bald heads and beards, and the younger ones are termed σατυρίσκοι (satyriskoi).9

All kinds of satyrs belong to the retinue of Dionysus,10 and are always described as fond of wine, whence they often appear either with a cup or a thyrsus in their hand,11 and of every kind of sensual pleasure, whence they are seen sleeping, playing musical instruments or engaged in voluptuous dances with nymphs.12 Like all the gods dwelling in forests and fields, they were greatly dreaded by mortals.13

Later writers, especially the Roman poets, confound the satyrs with the Pans and the Italian fauns, and accordingly represent them with larger horns and goats' feet,14 although originally they were quite distinct kinds of beings, and in works of art, too, they are kept quite distinct. Satyrs usually appear with flutes, the thyrsus, syrinx, the shepherd staff, cups or bags filled with wine; they are dressed with the skins of animals, and wear wreaths of vine, ivy or fir.

The satyr is frequently portrayed on Greek vases as a man with some animal characteristics, as described above. They are usually portrayed in sensuous and sometimes obscene scenes, often in the company of nymphs or maenads whom they playfully chase.

In sculptures their appearance is somewhat more subdued and human-like. The most celebrated sculpture in antiquity was the marble satyr of Praxiteles (4th century BCE):15 holding a flute in one hand and the other at his side, he rests against a tree trunk. From the Hellenistic period is the Satyr Barberini, a drunken satyr who sleeps off his intoxication (third century BCE, partially restored; Munich). Satyrs are found on numerous frescoes, coins, gemstones, etc.