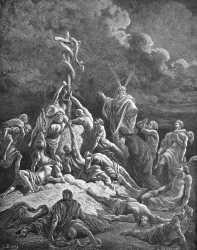 "Of copper." The bronze serpent Nechushtan appears as an enigmatic and fascinating entity. He is the enemy of god. Evidence shows that the Israelites knew him well in Egypt. The tribe of Dan carried the image of Nechushtan, and so he followed the Israelites into the long sojourn in the desert before they reached the land of Canaan, later to be named Israel.

Monotheism abhors graven images to such an extent, that it has often tried to impress upon its followers the erroneous belief that the deity and its image are one and the same. Actually, in all polytheistic religions, the image is only the god's representation and temporary dwelling place, though it is endowed with special powers by the deity. The god or goddess generally has a separate permanent dwelling place, be it Olympus, Valhalla, the sky, the sea, or as in the case of the original Yahweh, a fiery active desert volcano. Judaism does not acknowledge any god but the Lord, who has many names (God, Yahweh, Jehovah, Elohim, Adonai, etc.) but only one presence.

Many images of gods and goddesses were left from the early days of Judaism, before monotheism was complete. The Bible, which was written when the Jews achieved strict monotheism, regularly denied their existence as deities, and rationalized them in any way possible. They include the Cherubim, who really look like winged sphinxes, bull calves, of which the most famous was the Golden Calf created in Sinai, and the Seraphim, who looked like winged snakes. Among these images, the bronze serpent Nechushtan appears as an enigmatic and fascinating entity.

Unlike many other early religions, Judaism does not love the serpent, but nevertheless respects its high intelligence. In Genesis, written many generations after Nechushtan lost his deified position, he is blamed for tempting Eve to eat the fruit of the Tree of Knowledge. It is clear that even then he was still admired for his wisdom: "Now the serpent was more subtle than any beast of the field which the Lord God had made."1 This attitude continued into even later Jewish folklore and myth, and the Hebrew word often used to describe the snake is armumi, meaning cunning, crafty, and shrewd. The Genesis story of the Fall of Adam and Eve is a fine example of how the Bible sometimes described the early struggle between God and the other deities, and the war between Nechushtan and God ends with God's total victory: "And the Lord God said unto the serpent, Because thou hast done this, thou art cursed above all cattle, and above every beast of the field; upon thy belly shalt thou go, and dust shalt thou eat all the days of thy life." This story seems to claim that Nechushtan lost all his powers and God reigned supreme, but this is not quite the end. Nechushtan returns in Exodus.

So who is Nechushtan? Where did this enemy of God come from? To start with, he is, unquestionably, a snake. His name is derived from two Hebrew words: nachash (snake or serpent in English) and nechoshet (bronze, or the copper used for the preparation of bronze). The Bible states that Nechushtan's statue was created from nechoshet, and eventually, around 700 BCE, that same statue was melted by King Hezekiah who wanted to use the valuable metal and at the same time prove Yahweh's superiority over the snake god: "He removed the high places, and brake the images, and cut down the groves, and brake in pieces the brasen serpent that Moses had made: for unto those days the children of Israel did burn incense to it: and he called it Nechushtan."2

Evidence shows that the Israelites knew him well in Egypt. When Moses came to take the Israelites out of Egypt, a description of one of the miracles shows the state of rivalry between the Yahweh cult and the Nechushtan cult: "And Moses and Aaron went in unto Pharaoh, and they did as the Lord had commanded: and Aaron cast down his rod before Pharaoh, and before his servants, and it became a serpent. Then Pharaoh also called the wise men and the sorcerers: now the magicians of Egypt, they also did in like manner with their enchantments. For they cast down every man his rod, and they became serpents: but Aaron's rod swallowed up their rods."3 God won the battle.

When Moses led the Israelites out of Egypt, each of the twelve tribes gathered under a flag, on which an image was painted. Many of the tribes had images of animal deities, such as the prominent Lion of Judah, which later found his way into religious Judaic symbolism. The tribe of Dan carried the image of Nechushtan, and so he followed the Israelites into the long sojourn in the desert before they reached the land of Canaan, later to be named Israel. The Israeli archaeologist Benno Rothenberg made a most amazing discovery in the copper mine area of Timna — where the Israelites undoubtedly spent some time — a small serpent of brass sitting in a tabernacle which looked very much like a miniature version of the tabernacle described in the Bible (elaborate descriptions of the Israelite Tabernacle can be found in Exodus 25-31 and 35-39). Since this area was associated with Midianite occupation, and as Moses had married a Midianite woman, some scholars think that perhaps Nechushtan had a Midianite origin. Even though the tribe of Dan took him out of Egypt on their flag, there is no conflict here, because connections between the Israelites, even while in Egypt, and other nations, did not really stop completely at any point in time. Another statue of Nechushtan in a similar (though not identical) tabernacle was found later in the area of Tadmor.

The most interesting story regarding Nechushtan is again connected with Moses: "And the people spake against God, and against Moses, Wherefore have ye brought us up out of Egypt to die in the wilderness? For there is no bread, neither is there any water; and our soul loatheth this light bread. And the Lord sent fiery serpents among the people, and they bit the people; and much people of Israel died. Therefore the people came to Moses, and said, We have sinned, for we have spoken against the Lord, and against thee; pray unto the Lord, that he take away the serpents from us. And Moses prayed for the people. And the Lord said unto Moses, Make thee a fiery serpent, and set it upon a pole: and it shall come to pass, that every one that is bitten, when he looketh upon it, shall live. And Moses made a serpent of brass, and put it upon a pole, and it came to pass, that if a serpent had bitten any man, when he beheld the serpent of brass, he lived."4 This is the point where Nechushtan is absorbed into traditional Judaism, since according to this story God commands Moses to build him.

Following this trail, the exact origin of Nechushtan remains shrouded in mystery so befitting the wisest of all beasts. Still, it seems safe to assume that he is a very ancient god, probably from Egyptian, Canaanite, or Midianite origin, who somehow found his way to a portion of the Israelites that called themselves the Tribe of Dan, later to be mythologically and romantically identified with the descendants of the Patriarch Jacob's son Dan. Compared to the Sumerian snake devoted to the god of life, Ningizidda, and to the Greek association of the snake with Asclepius, he could have been a god of life. Compared to other snake gods, he may have been a god of fertility. He was sufficiency important to survive the desert, the fight for Canaan, and even the breaking up of the Kingdom into two parts, and occupied an important place right inside the temple until it was melted by King Hezekiah. Even then he was not forgotten — Judaic myth and legend contains many legends about snakes and their wise ways.