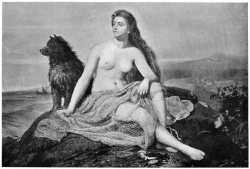 "Plunder." A Norse sea goddess, listed among the Ásynjur in the Nafnaþulur but she is never found among them, nor does she appear in any of the extant myths. Snorri Sturluson says that she is the wife of Ægir and by him the mother of the nine billow maidens. She has a net with which she catches men who go upon the sea, and it was this net, according to the eddic poem Reginsmál, that Loki used to catch the dwarf Andvari, who had assumed the form of a salmon.

Rán appears in kennings having to do with the sea, which is periphrased as Husband of Rán, Land of Rán, and Rán's Road. A kenning for gold is Fire of Rán.