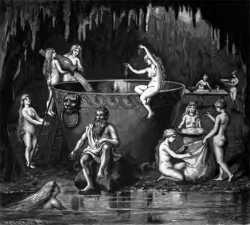 "Sea; sea-giant." The god of the sea in Norse mythology, and perhaps the personification of the power of the ocean. His wife is Rán and he is by her the father of nine giant daughters, the billow maidens, who each reflect the different characteristics of the waves.

Ægir is the host of various feasts, several of which form the backdrop of other tales involving the gods. For instance, in Hymiskviða, where Thor acquired a kettle large enough for Ægir to brew the ale for the Æsir, or in the poem Lokasenna, which is also known as Ægisdrekka ("Ægir's drinking party"). Another reference is found in Grímnismál.

According to the prose header to Lokasenna, Ægir, who was also called Gýmir, had brewed beer for the Æsir in the great kettle Thor had brought. All the gods came to the entertainment, except for Thor who was in the eastern lands, and many of the álfar. Bright gold was there used instead of fire-light and beer served itself to the guests. It was a great sanctuary. The guest greatly praised the excellence of Ægir's servants Eldir and Fimafeng, which annoyed Loki and so he slew Fimafeng. The Æsir chased him into the forest but he returns and begins to viciously insult the gods. At the end of the poem, Loki says to Ægir:

Ægir! thou hast brewed beer;
but thou never shalt henceforth
a compotation hold.
All thy possessions,
which are herein,
flame shall play over,
and on thy back shall burn thee.

A certain man was named Ægir, or Hlér. He dwelt on the island which is now called Hlér's Isle, and was deeply versed in black magic. He took his way to Ásgard, but the Æsir had foreknowledge of his journey; he was received with good cheer, and yet many things were done by deceit, with eye-illusions. And at evening, when it was time for drinking, Odin had swords brought into the hall, so bright that light radiated from them: and other illumination was not used while they sat at drinking. Then the Æsir came in to their banquet, and in the high-seats sat them down those twelve Æsir who were appointed to be judges; these were their names: Thor, Njördr, Freyr, Týr, Heimdallr, Bragi, Vídarr, Váli, Ullr, Hœnir, Forseti, Loki; and in like manner the Ásynjur: Frigg, Freyja, Gefjun, Idunn, Gerdr, Sigyn, Fulla, Nanna. It seemed glorious to Ægir to look about him in the hall: the wainscottings there were all hung with fair shields; there was also stinging mead, copiously quaffed. The man seated next to Ægir was Bragi, and they took part together in drinking and in converse: Bragi told Ægir of many things which had come to pass among the Æsir.

In chapter 33, which is based on Lokasenna, Snorri explains why gold is called Ægir's Fire. When Ægir was ready to go home, he invited Odin and all the Æsir to visit him in three months' time. All the gods came, with the exception of Thor, and when they had taken their seats, Ægir had bright gold brought in onto the floor of the hall, and the gold gave forth light and illumined the hall like fire: and it was used there for lights at his banquet, even as in Valhalla swords were used in place of fire. Hence gold is called Ægir's Fire or Fire of the Sea, or Brightness of Ægir.

Some kennings for sea are Ægir's Wide Jaws and Father of Ægir's Daughters, and a kenning for ship is Ægir's Horse.

In several mnemonic name-lists, Ægir is the name of a jötunn. See also Hlér.

His name is associated with the Old Gothic ahwa, "water."

For other occurances of the name "Ægir", click here.