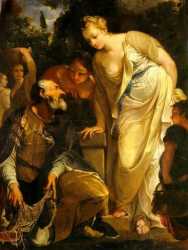 "A noose." The daughter of Bethuel, sister of Laban, and grandniece of Abraham. She became the wife of Isaac, who was at that time already forty years old.1 The circumstances under which Abraham's "steward" found her at the "city of Nahor," in Padan-aram, are narrated in Gen. 24-27.

Rebecca was barren but Isaac prayed to God and she conceived. During her pregnancy, the children struggled together within her and when she asked God why that was happening to her, God said to her: "Two nations are in your womb, and two peoples from within you shall be divided; the one shall be stronger than the other, the older shall serve the younger."

Rebecca gave birth to twins. The first came out red, "all his body like a hairy cloak," so they called him Esau. Afterward his brother came out, his hand holding Esau's heel, so his name was called Jacob. Isaac was sixty years old at that time. Jacob was Rebecca's favorite.

When Isaac had become old and blind, and not knowing the day of his death, he called Esau to him. He asked Esau to go out in the field and bring him some venison, and after his return he would bless him. Rebecca overheard them talking and felt that the blessing should go to Jacob, since she was told that Esau should serve Jacob. When Esau was out hunting, she instructed Jacob to fetch her two kids of goats from the flock, to make Isaac a savory meal. She then gave him Esau's shirt, so that he would smell of the field like his brother, and put goat skin on his hands to make them feel exactly like Esau's hairy skin. Their subterfuge worked and Jacob received Isaac's blessing. This filled Esau with hatred toward his brother, who had now taken his birthright and his father's blessing. Fearing for her son's life, Rebecca sent Jacob to her brother's house.

The time and circumstances of her death are not recorded, but it is said that she was buried in the cave of Machpelah.2