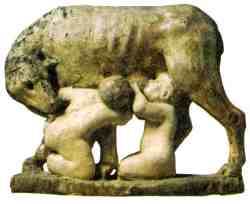 Also Romus,1 the twin-brother of Romulus, the sons of Mars and Rhea Silvia, and founders of the Roman empire. He was killed by his brother, or by the solder Celer, when he scoffed at the lowliness of the city wall. In remorse Romulus instituted the festival of the Lemuria for the souls of the departed. He also set an empty throne next to his, with a scepter and a crown, that his brother might seem to reign with him.