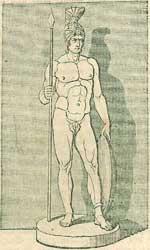 An ancient Roman god, who was at an early period identified by the Romans with the Greek Ares, or the god delighting in bloody war, although there are a variety of indications that the Italian Mars was originally a divinity of a very different nature. In the first place Mars bore the surname of Silvanus, and sacrifices were offered to him for the prosperity of the fields and flocks; and in the second a lance was honored at Rome as well as at Praeneste as the symbol of Mars,1 so that Mars resembles more the Greek Pallas Athena than Ares. The transition from the idea of Mars as an agricultural god to that of a warlike being, was not difficult with the early Latins, as the two occupations were intimately connected. The name of the god in the Sabine and Oscan was Mamers; and Mars itself is a contraction of Mavers or Mavors.

Next to Jupiter, Mars enjoyed the highest honors at Rome: he frequently is designated as father Mars, whence the forms Marspiter and Maspiter, analogous to Jupiter;2 and Jupiter, Mars, and Quirinus, were the three tutelary divinities of Rome, to each of whom king Numa appointed a flamen, whose rank was sometimes thought higher even than that of the great pontiff.3 Hence a very ancient sanctuary was dedicated to Mars on the Quirinal hill, near the temple of Dius Fidius, from which he derived his surname of Quirinus,4 and hence he was regarded as the father of the Roman people, having begotten the founders of Rome by Rhea Silvia, a priestess of Vesta.

The rites of the worship of Mars all point to victory, in proof of which we need only direct attention to the dances in armor of the Salii, the dedication of the place of warlike exercises and games to Mars (Campus Martius), and that war itself is frequently designated by the name of Mars. But being the father of the Romans, Mars was also the protector of the most honorable pursuit, i.e. agriculture, and hence he was invoked to be propitious to the household of the rustic Roman;5 and under the name of Silvanus, he was worshiped to take care of the cattle.6

The warlike Mars was called Gradivus, as the rustic god was called Silvanus; while, in his relation to the state, he bore the name of Quirinus. These are the three principal aspects under which the god appears; and in reference to the second, it may be remarked that females were excluded from his worship, and that accordingly he presided more particularly over those occupations of country life which belonged to the male sex.7 But notwithstanding this, Mars was conceived not only accompanied by female divinities, but one of them, Nerio, or Neriene, is even described as his wife.8

Mars was further looked upon as a god with prophetic powers; and in the neighborhood of Reate there had been a very ancient oracle of the god,9 in which the future was revealed through a woodpecker (picus), which was sacred to him, and was for this reason surnamed Martius. The wolf also was sacred to Mars, and these animals, together with the horse, were his favorite sacrifices. Numerous temples were dedicated to him at Rome, the most important of which was that outside the Porta Capena, on the Appian road,10 and that of Mars Ultor, which was built by Augustus, in the Forum.11

An Etruscan bronze statue of Mars by Todi (fourth century BCE), located at the Vatican Museum, shows Mars wearing a helmet and armor. On murals in Pompeii the love between Mars and Venus is depicted, for instance at the Casa di Marte e Venere and the Casa di Marco L. Frontone. In the Renaissance he is primarily depicted as the lover of Venus and in the baroque period as the god of war, such as by Velasquez. Later sculptures of Mars were made by Canova and Thorwaldsen.