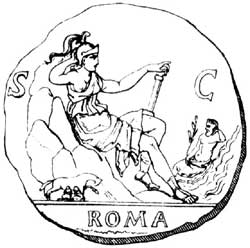 The personification of the city of Rome, and as such called Dea Roma. Temples were erected to her, not only at Rome, but in other cities of the empire, such as Smyrna.1 She was in reality the genius of the city of Rome, and was worshiped as such from early times; but it seems that previous to the time of Augustus, there was no temple dedicated to her in the city; but afterwards their number increased in all parts of the empire.2 In 121 CE, Hadrianus began the construction of the temple of Venus and Roma on the Viminal hill in Rome, and around 140 CE the temple was inaugurated by Antonius Pius. Important parts of the temple still remain.

As Roma (ῥῶμη) also signified "strength," it is not impossible that the ode of Erinna, addressed to Roma, may be an ode to the personification of strength.

Roma is usually depicted as a female figure in a long robe, wearing a helmet adorned with the head and wings of a griffin. She is usually seated on a throne, holding a spear in her hand, while her shield leans against the throne. Her portrait can be found on many coins and reliefs.

For other occurances of the name "Roma", click here.