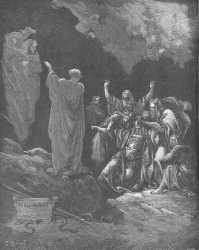 "Wished." The son of Kish, of the tribe of Benjamin, the first king of the Jewish nation. The singular providential circumstances connected with his election as king are recorded in 1 Sam. 8-10. His father's she-asses had strayed, and Saul was sent with a servant to seek for them. Leaving his home at Gibeah,1 Saul and his servant went toward the north-west over Mount Ephraim, and then turning north-east they came to "the land of Shalisha," and thence eastward to the land of Shalim, and at length came to the district of Zuph, near Samuel's home at Ramah.2 At this point Saul proposed to return from the three days' fruitless search, but his servant suggested that they should first consult the "seer." Hearing that he was about to offer sacrifice, the two hastened into Ramah, and "behold, Samuel came out against them," on his way to the bamah, i.e., the "height", where sacrifice was to be offered; and in answer to Saul's question, "Tell me, I pray thee, where the seer's house is," Samuel made himself known to him.

Samuel had been divinely prepared for his coming3, and received Saul as his guest. He took him with him to the sacrifice, and then after the feast "communed with Saul upon the top of the house." On the morrow Samuel "took a vial of oil and poured it on his head," and anointed Saul as king over Israel,4 giving him three signs in confirmation of his call to be king. When Saul reached his home in Gibeah the last of these signs was fulfilled, and when he met "a company of prophets, "the Spirit of God came upon him, and he prophesied among them." All who knew him before noticed the change in him and said, "What is this that is come unto the son of Kish? Is Saul also among the prophets?", a saying which passed into a "proverb."5

The intercourse between Saul and Samuel was as yet unknown to the people. The "anointing" had been in secret, and the time had come when the transaction must be confirmed by the nation. Samuel accordingly summoned the people to a solemn assembly "before the Lord" at Mizpeh. Here the lot was drawn,6 and it fell upon Saul, and when he was presented before them, "all the people shouted, and said, God save the king!" He now returned to his home in Gibeah. On reaching his home resumed the quiet toils of his former life.

Soon after this, on hearing of the conduct of Nahash the Ammonite at Jabesh-Gilead, an army out of all the tribes of Israel rallied at his summons to the trysting-place at Bezek, and he led them forth a great army to battle, gaining victory over the Ammonite invaders at Jabesh.7 At the invitation of Samuel "all the people went to Gilgal, and there they made Saul king before the Lord in Gilgal." Samuel now officially anointed him as king.8 Although Samuel never ceased to be a judge in Israel, yet now his work in that capacity practically came to an end.

Saul now undertook it upon him to free the land from its hereditary enemies the Philistines, and for this end he gathered together an army of 3,000 men.9 The Philistines were encamped at Geba. Saul, with 2,000 men, occupied Michmash and Mount Bethel; while his son Jonathan, with 1,000 men, occupied Gibeah, to the south of Geba, and "smote" the Philistines in Geba. Thus roused, the Philistines, who gathered an army of 30,000 chariots and 6,000 horsemen, and "people as the sand which is on the sea-shore in multitude," encamped in Michmash, which Saul had evacuated for Gilgal. Saul now tarried for seven days in Gilgal before making any movement, as Samuel had appointed.10 Saul became impatient on the seventh day, as it was drawing to a close, and made an end of offering the burnt offering. Samuel appeared and warned him of the consequences of his disobedience, for he had not waited long enough, and told him that his kingdom would not last.11

Saul's reign, however, continued to be one of almost constant war against his enemies round about,17 in all of which he proved victorious. The war against the Amalekites is the only one which is recorded at length.18 These oldest and hereditary19 enemies of Israel occupied the territory to the south and south-west of Palestine. Samuel summoned Saul to execute the "ban" which God had pronounced20 on this foe of Israel. The cup of their iniquity was now full. This command was "the test of his moral qualification for being king." Saul proceeded to execute the divine command; and gathering the people together, marched from Telaim21 against the Amalekites, whom he smote "from Havilah until thou comest to Shur," destroying "all the people with the edge of the sword", i.e., all that fell into his hands. He was, however, guilty of rebellion and disobedience in sparing Agag their king, and in conniving at his soldiers' sparing the best of the sheep and cattle; and Samuel, following Saul to Gilgal, in the Jordan valley, said unto him, "Because thou hast rejected the word of the Lord, he also hath rejected thee from being king."22 The kingdom was rent from Saul and was given to another, even to David, whom God chose to be Saul's successor, and whom Samuel anointed.23 From that day "the spirit of the Lord departed from Saul, and an evil spirit from the Lord troubled him." He and Samuel parted only to meet once again at one of the schools of the prophets.

David was now sent for as a "cunning player on an harp,"24 to play before Saul when the evil spirit troubled him, and thus was introduced to the court of Saul. He became a great favorite with the king. At length David returned to his father's house and to his wonted avocation as a shepherd for perhaps some three years. The Philistines once more invaded the land, and gathered their army between Shochoh and Azekah, in Ephes-dammim, on the southern slope of the valley of Elah. Saul and the men of Israel went forth to meet them, and encamped on the northern slope of the same valley which lay between the two armies. It was here that David slew Goliath of Gath, the champion of the Philistines,25 an exploit which led to the flight and defeat of the Philistine army. Saul now took David permanently into his service;26 but he became jealous of him,27 and on many occasions showed his enmity toward him,28 his enmity ripening into a purpose of murder which at different times he tried in vain to carry out.

After some time the Philistines "gathered themselves together" in the plain of Esdraelon, and pitched their camp at Shunem, on the slope of Little Hermon; and Saul "gathered all Israel together," and "pitched in Gilboa."29 Being unable to discover the mind of God, Saul, accompanied by two of his retinue, betook himself to the "witch of Endor," some 7 or 8 miles distant. Here he was overwhelmed by the startling communication that was mysteriously made to him by Samuel,39 who appeared to him. "He fell straightway all along on the earth, and was sore afraid, because of the words of Samuel."31 The Philistine host "fought against Israel: and the men of Israel fled before the Philistines, and fell down slain in Mount Gilboa."32 In his despair at the disaster that had befallen his army, Saul "took a sword and fell upon it." And the Philistines on the morrow "found Saul and his three sons fallen in Mount Gilboa." Having cut off his head, they sent it with his weapons to Philistia, and hung up the skull in the temple of Dagon at Ashdod. They suspended his headless body, with that of Jonathan, from the walls of Bethshan. The men of Jabesh-gilead afterwards removed the bodies from this position; and having burnt the flesh, they buried the bodies under a tree at Jabesh. The remains were, however, afterwards removed to the family sepulcher at Zelah.33

For other occurances of the name "Saul", click here.