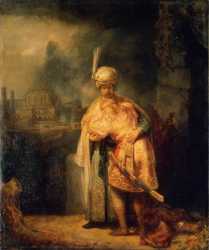 The eldest son of King Saul, and the bosom friend of David. He is first mentioned when he was about thirty years of age, some time after his father's accession to the throne.1 Like his father, he was a man of great strength and activity,2 and excelled in archery and slinging.3 The affection that evidently subsisted between him and his father was interrupted by the growth of Saul's insanity. At length, "in fierce anger," he left his father's presence and cast in his lot with the cause of David.4

After an eventful career, interwoven to a great extent with that of David, he fell, along with his father and his two brothers, on the fatal field of Gilboa.5 He was first buried at Jabesh-gilead, but his remains were afterwards removed with those of his father to Zelah, in Benjamin.6 His death was the occasion of David's famous elegy of "the Song of the Bow."7 He left one son five years old, Merib-baal, or Mephibosheth.8