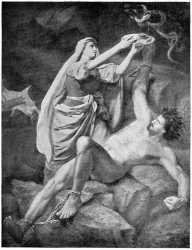 "Victorious girl-friend." The faithful wife of Loki, and by him the mother of Nari. She remained loyal to him, even after he had been punished by the Æsir for his role in the death of Baldr, as found in Gylfaginning (50). The Æsir took Loki into a cave and bound him to stone slabs with the entrails of his son:

Then Skadi took a venomous serpent and fastened it up over him, so that the venom should drip from the serpent into his face. But Sigyn, his wife, stands near him and holds a basin under the venom-drops; and when the basin is full, she goes and pours out the venom, but in the meantime the venom drips into his face. Then he writhes against it with such force that all the earth trembles.

Sigyn is mentioned only once in the Poetic Edda, in Völuspa, where the seeress says:

Bound she saw lying,
under Hveralund,
a monstrous form,
to Loki like.
There sits Sigyn,
for her consort's sake,
not right glad.