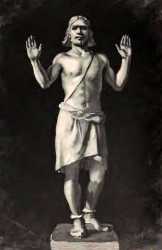 A son of Odin, the god of light, joy, purity, and the summer sun. The thirteenth-century Icelander Snorri Sturluson says this about Baldr in Gylfaginning:

The second son of Odin is Baldr, and good things are to be said of him. He is best, and all praise him; he is so fair of feature, and so bright, that light shines from him. A certain herb is so white that it is likened to Baldr's brow; of all grasses it is whitest, and by it thou mayest judge his fairness, both in hair and in body. He is the wisest of the Æsir, and the fairest-spoken and most gracious; and that quality attends him, that none may gainsay his judgments.

Baldr's wife is Nanna and their son is Forseti, but neither plays more than a minor role in the extant literature. Baldr's dwelling is Breiðablik.

In the eddic poem Baldrs draumar, also known as Vegtamskviða, the god is having baleful dreams. The Æsir hold council to find out why he is having these dreams. They questioned the jötnar, the wise seers of the future, and they said that Baldr was destined to die. The gods then sought the assurance of every being that they would not harm Baldr, and all species swore an oath to spare him. Odin fears something defective; he thinks the hamingjur may have departed and again the Æsir convene to decide upon a course of action.

Odin saddles Sleipnir and rides to Niflheimr and raises a völva from her grave. He asks her who will be Baldr's slayer, and she tells him that this will be Baldr's half-brother Höðr. Odin then asks her who will avenge Baldr's death. The völva says that Rindr shall bear a son, who, when only one night old, shall slay Höðr. Baldr's death is also prophesied in Völuspá (Codex Regius), where the seeress says he shall die when Höðr hurls a shaft made from mistletoe, and that his death shall be avenged by Baldr's brother, one night old.

Snorri devotes a considerable part of his Prose Edda to the tale of the death of Baldr and further elaborates it, although the omits the vengeance on Höðr.

Now shall be told of those tidings which seemed of more consequence to the Æsir. The beginning of the story is this, that Baldr the Good dreamed great and perilous dreams touching his life. When he told these dreams to the Æsir, then they took counsel together: and this was their decision: to ask safety for Baldr from all kinds of dangers. And Frigg took oaths to this purport, that fire and water should spare Baldr, likewise iron and metal of all kinds, stones, earth, trees, sicknesses, beasts, birds, venom, serpents. And when that was done and made known, then it was a diversion of Baldr's and the Æsir, that he should stand up in the Thing, and all the others should some shoot at him, some hew at him, some beat him with stones; but whatsoever was done hurt him not at all, and that seemed to them all a very worshipful thing.

But when Loki Laufeyarson saw this, it pleased him ill that Baldr took no hurt. He went to Fensalir to Frigg, and made himself into the likeness of a woman. Then Frigg asked if that woman knew what the Æsir did at the Thing. She said that all were shooting at Baldr, and moreover, that he took no hurt. Then said Frigg: Neither weapons nor trees may hurt Baldr: I have taken oaths of them all. Then the woman asked: Have all things taken oaths to spare Baldr? and Frigg answered: There grows a tree-sprout alone westward of Valhall: it is called Mistletoe; I thought it too young to ask the oath of. Then straightway the woman turned away; but Loki took Mistletoe and pulled it up and went to the Thing.

Then, when Baldr was fallen, words failed all the Æsir, and their hands likewise to lay hold of him; each looked at the other, and all were of one mind as to him who had. wrought the work, but none might take vengeance, so great a sanctuary was in that place. But when the Æsir tried to speak, then it befell first that weeping broke out, so that none might speak to the others with words concerning his grief. But Odin bore that misfortune by so much the worst, as he had most perception of how great harm and loss for the Æsir were in the death of Baldr.

Now when the gods had come to themselves, Frigg spake, and asked who there might be among the Æsir who would fain have for his own all her love and favor: let him ride the road to Hel, and seek if he may find Baldr, and offer Hel a ransom if she will let Baldr come home to Ásgard. And he is named Hermódr the Bold, Odin's son, who undertook that embassy. Then Sleipnir was taken, Odin's steed, and led forward; and Hermódr mounted on that horse and galloped off.

The Æsir took the body of Baldr and brought it to the sea. Hringhorni is the name of Baldr's ship: it was greatest of all ships; the gods would have launched it and made Baldr's pyre thereon, but the ship stirred not forward. Then word was sent to Jötunheim after that giantess who is called Hyrrokkin. When she had come, riding a wolf and having a viper for bridle, then she leaped off the steed; and Odin called to four berserks to tend the steed; but they were not able to hold it until they had felled it. Then Hyrrokkin went to the prow of the boat and thrust it out at the first push, so that fire burst from the rollers, and all lands trembled. Thor became angry and clutched his hammer, and would straightway have broken her head, had not the gods prayed for peace for her.

Then was the body of Baldr borne out on shipboard; and when his wife, Nanna the daughter of Nep, saw that, straightway her heart burst with grief, and she died; she was borne to the pyre, and fire was kindled. Then Thor stood by and hallowed the pyre with Mjöllnir; and before his feet ran a certain dwarf which was named Litr; Thor kicked at him with his foot and thrust him into the fire, and he burned. People of many races visited this burning: First is to be told of Odin, how Frigg and the Valkyrs went with him, and his ravens; but Freyr drove in his chariot with the boar called Gold-Mane, or Fearful-Tusk, and Heimdallr rode the horse called Gold-Top, and Freyja drove her cats. Thither came also much people of the Rime-Giants and the Hill-Giants. Odin laid on the pyre that gold ring which is called Draupnir; this quality attended it, that every ninth night there dropped from it eight gold rings of equal weight. Baldr's horse was led to the bale-fire with all his trappings.

Now this is to be told concerning Hermódr, that he rode nine nights through dark dales and deep, so that he saw not before he was come to the river Gjöll and rode onto the Gjöll-Bridge; which bridge is thatched with glittering gold. Módgudr is the maiden called who guards the bridge; she asked him his name and race, saying that the day before there had ridden over the bridge five companies of dead men; but the bridge thunders no less under thee alone, and thou hast not the color of dead men. Why ridest thou hither on Hel-way? He answered: I am appointed to ride to Hel to seek out Baldr. Hast thou perchance seen Baldr on Hel-way? She said that Baldr had ridden there over Gjöll's Bridge,—but down and north lieth Hel-way.

Then Hermódr rode on till he came to Hel-gate; he dismounted from his steed and made his girths fast, mounted and pricked him with his spurs; and the steed leaped so hard over the gate that he came nowise near to it. Then Hermódr rode home to the hall and dismounted from his steed, went into the hall, and saw sitting there in the high-seat Baldr, his brother; and Hermódr tarried there overnight. At morn Hermódr prayed Hel that Baldr might ride home with him, and told her how great weeping was among the Æsir. But Hel said that in this wise it should be put to the test, whether Baldr were so all-beloved as had been said: If all things in the world, quick and dead, weep for him, then he shall go back to the Æsir; but he shall remain with Hel if any gainsay it or will not weep. Then Hermódr arose; but Baldr led him out of the hall, and took the ring Draupnir and sent it to Odin for a remembrance. And Nanna sent Frigg a linen smock, and yet more gifts, and to Fulla a golden finger-ring.

Then Hermódr rode his way back, and came into Ásgard, and told all those tidings which he had seen and heard. Thereupon the Æsir sent over all the world messengers to pray that Baldr be wept out of Hel; and all men did this, and quick things, and the earth, and stones, and trees, and all metals,—even as thou must have seen that these things weep when they come out of frost and into the heat. Then, when the messengers went home, having well wrought their errand, they found, in a certain cave, where a giantess sat: she called herself Thökk. They prayed her to weep Baldr out of Hel; she answered:

Thökk will weep
waterless tears
For Baldr's bale-fare;
Living or dead,
I loved not the churl's son;
Let Hel hold to that she hath!

And men deem that she who was there was Loki Laufeyarson, who hath wrought most ill among the Æsir.

Thus Baldr remained in Hel. Snorri does not mention Váli's vengeance on Höðr nor his death. The gods did punish Loki for his involvement. They took him to a cave and there bound him with the entrails of his own son Nari. Loki's role in Baldr's death is not mentioned in Baldrs draumar, nor is Váli mentioned by name outside of Snorri.

According to stanza 62 of Völuspá, Baldr shall be restored to life after Ragnarök and shall dwell in Hroptr's hall together with his brother Höðr, their union being a symbol of the new age of peace.

In Skáldskaparmál Snorri says that Baldr can be periphrased as Son of Odin and Frigg, Husband of Nanna, Father of Forseti, Possessor of Hringhorni and Draupnir, Adversary of Hödr, Companion of Hel, God of Tears.

It has been suggested that the name Baldr hides an honorific title, from the Old English word bealdor, "lord" or "leader." See also Bældæg.

An alternative version of the story of Baldr is found Saxo Grammaticus' Gesta Danorum, in which Balderus and Høtherus compete for the hand of Nanna. In Beowulf, a certain Herebeald, the son of Hrēðel, is accidentally killed by his younger brother Hæþcyn with an arrow.