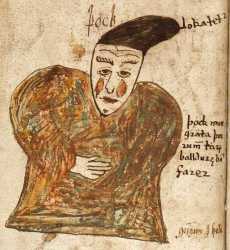 "Thanks." After Baldr's death, Hermóðr traveled to the underworld to plead with Hel for his brother's release. He told her how great the weeping was among the Æsir, but Hel wanted to put this to the test, and said: If all things in the world, quick and dead, weep for him, then he shall go back to the Æsir; but he shall remain with Hel if any gainsay it or will not weep.

Hermóðr returned to Ásgarðr and told all those tiding which he had seen and heard. The Æsir dispatched all over the world messengers to pray that Baldr be wept out of Hel; and all men did this, and things alive, and the earth, and stones, and trees, and all metals. Then, when the messengers went home, having completed their errand, they found, in a certain cave, a female jötunn who called herself Þökk. They prayed her to weep Baldr out of Hel, but she answered:

Thökk will weep waterless tears
For Baldr's bale-fare;
Living or dead, I loved not the churl's son;
Let Hel hold to that she hath!

Because of her refusal, Baldr had to remain in Hel. This giantess is deemed to be Loki in disguise, who has wrought most ill among the Æsir.