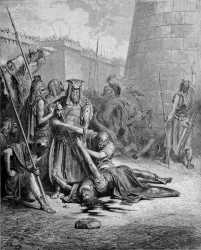 "My father a king." A son of Gideon,1 who was proclaimed king after the death of his father.2 One of his first acts was to murder his brothers, seventy in number, "on one stone," at Ophrah. Only one named Jotham escaped. He was an unprincipled, ambitious ruler, often engaged in war with his own subjects. When engaged in reducing the town of Thebez, which had revolted, he was struck mortally on his head by a mill-stone, thrown by the hand of a woman from the wall above. Perceiving that the wound was mortal, he desired his armor-bearer to thrust him through with his sword, that it might not be said he had perished by the hand of a woman.3

Abimelech was the sixth judge of Israel, and after him came Tola.

For other occurances of the name "Abimelech", click here.