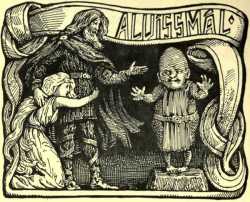 "All-wise." The pale-nosed dwarf who arrives at Thor's home and claims that he was promised Thor's daughter in marriage. Thor, who identifies himself as Vingþórr, son of Síðgrani, refuses because the deal was made in his absence and he wants to give her to the gods alone. He tells the dwarf that he can win his daughter if he can answer a series of questions.

Instead of being essentially mythological in nature, the questions all concern synonyms. Thor asks how the earth, heaven, moon, sun, fire, sea, etc. are called by the various races, and the dwarf's answers are simply strings of poetic circumlocutions, or kennings. For example, when Thor asks what the clouds are called in each and every world, Alvíss responds with:

Alvíss answers all of Thor's questions correctly and the god is impressed with the dwarf's wisdom and knowledge, but since he had made the tests last until sunrise, the rays of the sun petrify the dwarf:

In one breast
I have never found
more ancient lore. -
By great wiles thou hast, I tell thee,
been deluded.
Thou art above ground, dwarf! at dawn;
already in the hall the sun is shining!

The questions and answer are versified in Alvíssmál ("Ballad of the All-wise"), probably composed in the twelfth century and found only in the Codex Regius.

The daughter is not named in the poem, but this may be Þrúðr, Thor's daughter by Sif. The story in which she was promised to Alvíss is lost.