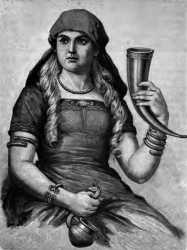 "Relation." The wife of Thor and by him the mother of Þrúðr. She is also the mother of Ullr, but the father is not mentioned. Sif appears in only one major myth, the one in which Loki, for mischief's sake, cut off all her hair. When Thor learned of this, he seized Loki, and would have broken every bone in his body, had Loki not promised to go to the dwarfs and have them make for her hair of gold. These dwarfs, Ívaldi's sons, fashioned the hair, which they said would grow to the flesh as soon as it came upon Sif's head.

Sif is briefly mentioned in the story of Hrungnir's visit to Valhalla, in which the giant boasted that he would lift up Valhalla and carry it to Jötunheimr, and sink Ásgarðr and kill all the gods, save that he would take Freyja and Sif home with him. In Lokasenna, she pours out mead for Loki, who then claims to have lain in her arms. Her infidelity is again referenced in Hárbarðsljóð, where Odin says that Sif has a lover at home.

Snorri Sturluson does not include her in his lists of Ásynjur, although in Skáldskaparmál, chapter 33, he briefly mentions her among the goddesses present at the feast that Ægir gave for the gods.

Her name appears in several kennings, usually in reference to either Thor or Ullr, or to gold, which can be called Sif's Hair and Sif's Firm-grown Tresses. Snorri in Skáldskaparmál says that Sif can be periphrased by calling her Wife of Thor, Mother of Ullr, Fair-Haired Goddess, Co-Wife of Járnsaxa, and Mother of Þrúðr. Other kennings in which her name appears are Sif's Consort and Husband of Sif (for Thor), Son of Sif (for Ullr), Harmer of Sif's Hair (for Loki), and Mother-in-law of Sif (for Jörð).

In the euhemeristic account of the gods, Snorri calls her Sibyl.