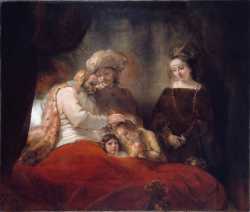 "Who makes to forget." The elder of the two sons of Joseph.1 He and his brother Ephraim were adopted by their grandfather Jacob as his own sons.2

When Joseph heard that his father was dying, he brought his sons before Jacob. The old man laid his right hand upon Ephraim's head, who was the younger, and his left upon Manasseh's. Joseph sought to correct his father, but Jacob said, "I know it, my son, I know it: he also shall become a people, and he also shall be great: but truly his younger brother shall be greater than he, and his seed shall become a multitude of nations,"3 and thus Ephraim was set before Manasseh.

There is an account of his marriage to a Syrian;4 and the only thing afterwards recorded of him is, that his grandchildren were "brought up upon Joseph's knees,"5 i.e., were from their birth adopted by Joseph as his own children.

The tribe of Manasseh was associated with that of Ephraim and Benjamin during the wanderings in the wilderness. They encamped on the west side of the tabernacle. According to the census taken at Sinai, this tribe then numbered 32,200.6 Forty years afterwards its numbers had increased to 52,700,7 and it was at this time the most distinguished of all the tribes.

The half of this tribe, along with Reuben and Gad, had their territory assigned them by Moses on the east of the Jordan;8 but it was left for Joshua to define the limits of each tribe. This territory on the east of Jordan was more valuable and of larger extent than all that was allotted to the nine and a half tribes in the land of Palestine. It is sometimes called "the land of Gilead," and is also spoken of as "on the other side of Jordan." The portion given to the half tribe of Manasseh was the largest on the east of Jordan. It embraced the whole of Bashan. It was bounded on the south by Mahanaim, and extended north to the foot of Lebanon. Argob, with its sixty cities, that "ocean of basaltic rocks and boulders tossed about in the wildest confusion," lay in the midst of this territory.

The whole "land of Gilead" having been conquered, the two and a half tribes left their wives and families in the fortified cities there, and accompanied the other tribes across the Jordan, and took part with them in the wars of conquest. The allotment of the land having been completed, Joshua dismissed the two and a half tribes, commending them for their heroic service.9 Thus dismissed, they returned over Jordan to their own inheritance.

On the west of Jordan the other half of the tribe of Manasseh was associated with Ephraim, and they had their portion in the very center of Palestine, an area of about 1,300 square miles, the most valuable part of the whole country, abounding in springs of water. Manasseh's portion was immediately to the north of that of Ephraim.10 Thus the western Manasseh defended the passes of Esdraelon as the eastern kept the passes of the Hauran.

For other occurances of the name "Manasseh", click here.