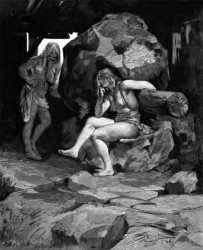 Fenja and Menja were two prescient maid-servants who were bought by the legendary Danish king Fróði when he went to a feast at the court of the Swedish king Fjölnir. The maidens were huge and strong, and Fróði set them to work at the mill Grótti, which possessed the property of grinding out whatever the grinder wished. They were made to grind out gold, peace and prosperity for Fróði, but were given no rest or solace. During their work they sang the song called Grottasöngr:

Now are we come
to the king's house,
the prescient damsels,
Fenia and Menia;
they are with Fródi,
Fridleif's son,
the powerful maidens,
in thraldom held.

In their song they reveal that they are giantesses and recount their past deeds, including the fact that they were the ones who made the grinding stone they are now chained to. They did not finish singing until they had ground into existence an army against Fróði. That same night a host led by the sea-king Mýsingr came and killed Fróði, and carried off his wealth. This was the end of the time known as the Peace of Fróði. Mýsingr took Fenja and Menja and the mill-stones with him aboard his ships, and bade them to ground white salt. They produced so much that the ships sank in Pentland Firth. It was then that the sea turned salt.

Fenja's Meal is a kenning for gold.