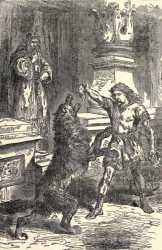 "Fen-dweller." The monstrous wolf which Loki begat with Angrboða, according to Völuspá hin skamma and Snorri Sturluson. In Völuspá the seeress foretells that Odin shall be killed by the wolf at Ragnarök and that his death shall be avenged by his son Víðarr. This is also found in Vafþrúðnismál, with the addition that before that time, Fenrir shall have devoured the sun (although the act is typically attributed to Sköll).

Snorri tells that the Æsir perceived by prophecy that from Loki's offspring great misfortune would befall them, so Odin had these children brought to him. He cast Jörmungandr into the deep sea and Hel into Niflheimr; Fenrir they brought up at home, but Týr alone dared to go to him and feed him meat. But when the gods observed how much he grew every day, and when the prophecies declared that he was fated to be their destruction, they sought to bind the animal. The story of Fenrir's binding is told in Gylfaginning, chapter 34:

They made a very strong fetter, which they called Lædingr, and brought it before the Wolf, bidding him try his strength against the fetter. The Wolf thought that no overwhelming odds, and let them do with him as they would. The first time the Wolf lashed out against it, the fetter broke; so he was loosed out of Lædingr. After this, the Æsir made a second fetter, stronger by half, which they called Drómi, and bade the Wolf try that fetter, saying he would become very famous for strength, if such huge workmanship should not suffice to hold him. But the Wolf thought that this fetter was very strong; he considered also that strength had increased in him since the time he broke Lædingr: it came into his mind, that he must expose himself to danger, if he would become famous. So he let the fetter be laid upon him. Now when the Æsir declared themselves ready, the Wolf shook himself, dashed the fetter against the earth and struggled fiercely with it, spurned against it, and broke the fetter, so that the fragments flew far. So he dashed himself out of Drómi. Since then it passes as a proverb, 'to loose out of Lædingr,' or 'to dash out of Drómi,' when anything is exceeding hard.

After that the Æsir feared that they should never be able to get the Wolf bound. Then Allfather sent him who is called Skírnir, Freyr's messenger, down into the region of the Black Elves, to certain dwarves, and caused to be made the fetter named Gleipnir. It was made of six things: the noise a cat makes in foot-fall, the beard of a woman, the roots of a rock, the sinews of a bear, the breath of a fish, and the spittle of a bird.

The fetter was soft and smooth as a silken ribbon, but as sure and strong as thou shalt now hear. Then, when the fetter was brought to the Æsir, they thanked the messenger well for his errand. Then the Æsir went out upon the lake called Ámsvartnir, to the island called Lyngvi, and summoning the Wolf with them, they showed him the silken ribbon and bade him burst it, saying that it was somewhat stouter than appeared from its thickness. And each passed it to the others, and tested it with the strength of their hands and it did not snap; yet they said the Wolf could break it. Then the Wolf answered: 'Touching this matter of the ribbon, it seems to me that I shall get no glory of it, though I snap asunder so slender a band; but if it be made with cunning and wiles, then, though it seem little, that band shall never come upon my feet.' Then the Æsir answered that he could easily snap apart a slight silken band, he who had before broken great fetters of iron, — 'but if thou shalt not be able to burst this band, then thou wilt not be able to frighten the gods; and then we shall unloose thee.' The Wolf said: 'If ye bind me so that I shall not get free again, then ye will act in such a way that it will be late ere I receive help from you; I am unwilling that this band should be laid upon me. Yet rather than that ye should impugn my courage, let some one of you lay his hand in my mouth, for a pledge that this is done in good faith.' Each of the Æsir looked at his neighbor, and none was willing to part with his hand, until Týr stretched out his right hand and laid it in the Wolf's mouth. But when the Wolf lashed out, the fetter became hardened; and the more he struggled against it, the tighter the band was. Then all laughed except Týr: he lost his hand.

When the Æsir saw that the Wolf was fully bound, they took the chain that was fast to the fetter, and which is called Gelgja, and passed it through a great rock — it is called Gjöll — and fixed the rock deep down into the earth. Then they took a great stone and drove it yet deeper into the earth — it was called Thviti — and used the stone for a fastening-pin. The Wolf gaped terribly, and thrashed about and strove to bite them; they thrust into his mouth a certain sword: the guards caught in his lower jaw, and the point in the upper; that is his gag. He howls hideously, and slaver runs out of his mouth: that is the river called Ván; there he lies till the Weird of the Gods.

Fenrir is to remain bound until Ragnarök. In Snorri's description of Ragnarök, the wolf shall be loosed and shall wreak havoc upon the world:

Fenris-Wolf shall advance with gaping mouth, and his lower jaw shall be against the earth, but the upper against heaven,—he would gape yet more if there were room for it; fires blaze from his eyes and nostrils.

Fenrir shall then go to Vígríðr, along with the other enemies of the gods, for his final encounter with Odin and his death at the hands of Víðarr:

The Wolf shall swallow Odin; that shall be his ending. But straight thereafter shall Vídarr stride forth and set one foot upon the lower jaw of the Wolf: on that foot he has the shoe, materials for which have been gathering throughout all time. (They are the scraps of leather which men cut out: of their shoes at toe or heel; therefore he who desires in his heart to come to the Æsir's help should cast those scraps away.) With one hand he shall seize the Wolf's upper jaw and tear his gullet asunder; and that is the death of the Wolf.

According to Völuspá however, Víðarr shall slay the wolf with his sword.

When Gangleri asks why the gods did not simply kill the wolf, seeing that they had expectation of evil from him, Hárr answers that so greatly did the gods esteem their holy place and sanctuary, that they would not stain it with the wolf's blood.

The loss of Týr's hand is referenced to in Lokasenna. Loki boasts that Fenrir tore off Týr's right hand; Týr responds that although he is lacking a hand, Loki is missing hróðrsvitnir, the "famous wolf." In the same poem Loki is referred to as the "wolf's sire." The eddic poem Völuspá contains a reference to Fenrir's progeny in the wood Járnviðr, and the tenth-century poet Eyvindr Finnsson skáldaspillir alludes to Fenrir is his Hákonarmál.

For other occurances of the name "Fenrir", click here.