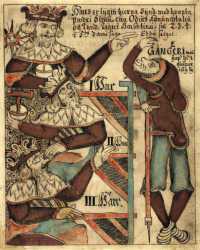 "Wave", "Sea." A legendary king, wise and skilled in magic, who, according to Snorri Sturluson, took over Sweden from the Æsir. His "beguiling" forms the basis for the Gylfaginning narrative in the Prose Edda.

Gylfi offered a certain wandering woman as much plow-land as she can plow in one one night, in exchange for her merry-making. But this woman was of the Æsir; she was Gefjon. She took from the north, from Jötunheimr, four oxen and set them before the plow. And with the plow she cut so wide and deep that it loosened up the land; and the oxen drew the land out into the sea and to the west. She gave the new land a name, calling it Zealand.

Gylfi was much troubled that the Æsir were so cunning that all things went according to their will. He pondered whether this might proceed from their own nature, or whether the divine powers which they worshipped might ordain such things. He disguised himself as an old man and set forth to Ásgarðr. The Æsir, having the second sight, saw his journeying before ever he came, and prepared against him deceptions of the eye. When Gylfi came into a town, he saw huge hall thatched with golden shields. In the doorway stood a man who asked of him his name. Gylfi called himself Gangleri and said that he was looking for lodging. He was taken inside, where he saw three high-seats, each above each other, and three men sat thereon. The one in the lowest seat was called Hárr, the one in the middle Jafnhárr, and the uppermost one Þridi.

When Hárr offered him food and drink, Gangleri said that he first desired to learn if there were any wise men within, and Hárr replied that he should not escape whole from there unless he were wiser. Thus begins Gangleri's questioning of Hárr, and his questions all concern the Norse gods. Afterwards, Hárr said to him:

"But now, if thou art able to ask yet further, then indeed I know not whence answer shall come to thee, for I never heard any man tell forth at greater length the course of the world; and now avail thyself of that which thou hast heard."

Then Gangleri heard loud noises on every side of him and when he looked around him, he stood on a level plain, the hall and mysterious figures had disappeared. He returned home and told the tidings which he had seen and heard; and after him each men told these tales to the other.