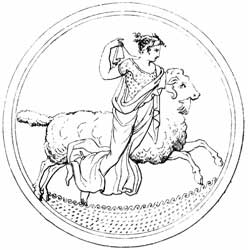 A daughter of Athamas and Nephele. She and her brother Phrixus fled on a ram, sent by Nephele, from the wiles of their stepmother Ino. During this flight Helle fell into the sea, between Sigeium and the Chersonesus, which was from then on known as the Hellespont (sea of Helle).1 Her brother safely reached Colchis where he sacrificed the ram to Zeus and hung the fleece in a wood dedicated to Ares, where it remained until Jason and the Argonauts arrived to claim it.

Helle's tomb was shown near Pactya, on the Hellespont.2 She is also called Nepheleis after her mother.3

According to some traditions, she is the mother of the giants Almops and Paeon by Poseidon, suggesting she was rescued by Poseidon after she fell into the water and perhaps converted by him into a sea deity.

The flight of Helle and Phrixus is seldom displayed on vases, but it was a popular subject for reliefs and murals.

For other occurances of the name "Helle", click here.