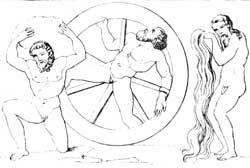 A son of Phlegyas,1 or, according to others, a son of Antion by Perimele, of Pasion, or of Ares.2 According to the common tradition, his mother was Dia, a daughter of Deioneus. He was king of the Lapiths or Phlegyes, and the father of Pirithous.3

When Deioneus demanded of Ixion the bridal gifts he had promised, Ixion treacherously invited him, as though it were to a banquet, and then contrived to make him fall into a pit filled with fire. As no one purified Ixion of this treacherous murder, and all the gods were indignant at him, Zeus took pity upon him, purified him, and invited him to his table. But Ixion was ungrateful to his benefactor, and attempted to win the love of Hera. Zeus made a phantom resembling Hera, and by it Ixion became the father of a centaur, who again having intercourse with Magnesian mares, became the father of the Hippocentaurs.4

Ixion, as a punishment, was chained by Hermes with his hands and feet to a wheel, which is described as winged or fiery, and said to have rolled perpetually in the air or in the lower world. He is further said to have been scourged, and compelled to exclaim, "Benefactors should be honored."

On various Greek vases from southern Italy the punishment of Ixion is depicted: a nude man, encircled by four serpents, is fastened to a burning wheel.