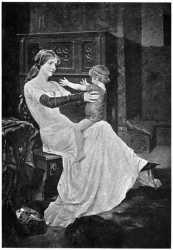 "Chief." Among his travels, the god Rígr came to a mansion inhabited by Faðir and Móðir. They welcomed him into their home and gave him excellent food. He slept between them in their bed for three nights and then left. Nine months later Móðir gave birth to a boy with blond hair and bright cheeks, and eyes as piercing as those of a young serpent. They wrapped him in silk and sprinkled him with water, and named him Jarl. As he grew up he began to handle weapons and to use horses, hounds, and hawks. Rígr returned from the forest to claim him as his son and gave him his own name of Rígr. He made Jarl his heir, taught him the runes, and advised him to seek lordship.

Jarl became lord of many homesteads and had much wealth. He married Erna ("brisk"), the daughter of Hersir, and she bore him eleven sons but no daughters. Their sons are called Burr, the eldest, Barn, Jóð and Aðal, Arfi, Mögr, Niðr and Niðjungr, Sonr and Sveinn, Kundr, and Konr. They learned games, and sports, and making shields and shafts, but only the youngest son, Konr, knew the runes. They are the ancestors of the warrior nobility.

The noun jarl is cognate with the English "earl." See also Þræll and Karl.