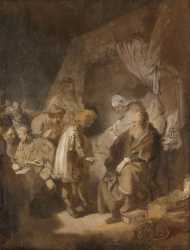 "Remover", "Increaser." The elder of the two sons of Jacob by Rachel,1 who, on the occasion of his birth, said, "God hath taken away [Heb. אָסַף, asaph] my reproach," and "the Lord shall add [Heb. יֹסֵ֧ף, yoseph] to me another son."2 He was a child of probably six years of age when his father returned from Haran to Canaan and took up his residence in the old patriarchal town of Hebron.

"Now Israel loved Joseph more than all his children, because he was the son of his old age," and he "made him a coat of many colours."3 His father's favoritism incurred the jealous hatred of his brothers.4 They "hated him, and could not speak peaceably unto him." Their anger was increased when he told them his first dream,5 in which their sheaves in the field made obeisance to his sheaf. In his second dream the sun and the moon and the eleven stars made obeisance to him (i.e., his father, mother, and eleven siblings).

Jacob desiring to hear tidings of his sons, who had gone to Shechem with their flocks, some 60 miles from Hebron, sent Joseph as his messenger to make inquiry regarding them. Joseph found that they had left Shechem for Dothan, whither he followed them. As soon as they saw him coming they began to plot against him, and would have killed him had not Reuben interposed. Instead, they stripped Joseph of his coat of many colors and cast him in a pit.

At Judah's suggestion they sold him to a company of Ishmaelite merchants for twenty pieces (shekels) of silver, ten pieces less than the current value of a slave. The brothers dipped the coat in goat's blood and brought it to Jacob, and said they had found it. Jacob believed his son had been devoured by some wild beast and would not be comforted.

The merchants brought Joseph into Egypt market, and ultimately sold him as a slave to Potiphar, an "officer of Pharaoh's, and captain of the guard."6 "The Lord blessed the Egyptian's house for Joseph's sake," and Potiphar made him overseer over his house. At length a false charge having been brought against him by Potiphar's wife, he was at once cast into the state prison,7 where he remained for at least two years. After a while the "chief of the cupbearers" and the "chief of the bakers" of Pharaoh's household were cast into the same prison.8 Each of these new prisoners dreamed a dream in the same night, which Joseph interpreted, the event occurring as he had said.

This led to Joseph's being remembered subsequently by the chief butler when Pharaoh also dreamed. At his suggestion Joseph was brought from prison to interpret the king's dreams. In the dream, seven "well favoured kine and fatfleshed" came out of the river and fed in a meadow. These were followed by seven other kine, "ill favoured and leanfleshed" which ate the first seven. In the second dream, seven good ears of corn were devoured by seven withered ears. Joseph said to Pharaoh that seven years of great plenty would come to Egypt, followed by seven years of famine. He counseled to take a fifth part of the land in the seven plenteous years and store the surplus grain in the cities.

Pharaoh was pleased with Joseph's wisdom in interpreting his dreams, and with his counsel with reference to the events then predicted; and he set him over all the land of Egypt,9 and gave him the name of Zaphnath-Paaneah (צָפְנַת פַּעְנֵחַ). He was married to Asenath, the daughter of the priest Potipherah of On, and thus became a member of the priestly class. Joseph was now about thirty years of age.

As Joseph had interpreted, seven years of plenty came, during which he stored up great abundance of corn in granaries built for the purpose. These years were followed by seven years of famine "over all the face of the earth," when "all countries came into Egypt to Joseph to buy corn."10 Thus "Joseph gathered up all the money that was in the land of Egypt, and in the land of Canaan, for the corn which they bought." Afterwards all the cattle and all the land, and at last the Egyptians themselves, became the property of Pharaoh.

During this period of famine Joseph's brethren also came down to Egypt to buy corn. The history of his dealings with them, and of the manner in which he at length made himself known to them is found in Gen. 42-45. Joseph directed his brethren to return and bring Jacob and his family to the land of Egypt, saying, "I will give you the good of the land of Egypt, and ye shall eat the fat of the land. Regard not your stuff; for the good of all the land is yours." Accordingly Jacob and his family, to the number of threescore and ten souls, together with "all that they had," went down to Egypt. They were settled in the land of Goshen, where Joseph was finally reunited with his father.11

Jacob at length died, and in fulfilment of a promise which he had exacted, Joseph went up to Canaan to bury his father in "the field of Ephron the Hittite."12 This was the last recorded act of Joseph, who again returned to Egypt.

By his wife Asenath, Joseph had two sons, Manasseh and Ephraim.13 Joseph having obtained a promise from his brethren that when the time should come that God would "bring them unto the land which he sware to Abraham, to Isaac, and to Jacob," they would carry up his bones out of Egypt, at length died, at the age of one hundred and ten years; and "they embalmed him, and he was put in a coffin."14 This promise was faithfully observed. Their descendants, long after, when the Exodus came, carried the body about with them during their forty years' wanderings, and at length buried it in Shechem, in the parcel of ground which Jacob bought from the sons of Hamor.15 With the death of Joseph the patriarchal age of the history of Israel came to a close.

For other occurances of the name "Joseph", click here.