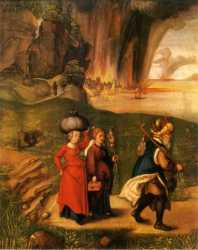 "A covering", "Veil." The son of Haran, and nephew of Abraham.1 On the death of his father, he was left in charge of his grandfather Terah,2 after whose death he accompanied his uncle Abraham into Canaan,3 thence into Egypt,4 and back again to Canaan.5 After this he separated from him and settled in Sodom.6 There his righteous soul was "vexed" from day to day,7 and he had great cause to regret this act. Not many years after the separation he was taken captive by Chedorlaomer, and was rescued by Abraham.8

At length, when the judgment of God descended on the cities of the plain,9 Lot was miraculously delivered. Two angels, who had come to destroy Sodom, hastened Lot to take his wife and two daughters and leave, lest they be consumed in the iniquity of the city. They were not to look behind. When fleeing from the doomed city Lot's wife "looked back from behind him, and became a pillar of salt."

From the words of warning in Luke 17:32, "Remember Lot's wife," it would seem as if she had gone back, or tarried so long behind in the desire to save some of her goods, that she became involved in the destruction which fell on the city.

Lot and his daughters sought refuge first in Zoar, which was nearer, and then, fearing to remain there longer, retired to a cave in the neighboring mountains. To preserve the seed of their father, his daughters made him drink wine and then at night lay with him. Thus both daughters became pregnant by their father. The eldest daughter bore a son, and called him Moab; the younger also bore a son, and she called him Ben-ammi.11

In Islam he is called Lut.

For other occurances of the name "Lot", click here.