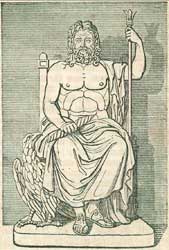 Iupiter or Iupiter Conciliatrix, or perhaps more correctly, Iuppiter, a contraction of Diovis pater, or Diespiter, and Diovis or dies, which was originally identical with divum (heaven); so that Jupiter literally means "the heavenly father." The same meaning is implied in the name Lucesius or Lucerius, by which he was called by the Oscans, and which was often used by the poet Naevius.1 The corresponding name of Juno is Lucina. It is further not impossible that the forgotten name, divus pater Falacer (see Falacer), mentioned by Varro,2 may be the same as Jupiter, since, according to Festus,3falandum was the Etruscan name for heaven. The surname of Supinalis4 likewise alludes to the dome of heaven.

As Jupiter was the lord of heaven, the Romans attributed to him power over all the changes in the heavens, as rain, storms, thunder and lightning, whence he had the epithets of Pluvius, Fulgurator, Tonitrualis, Tonans, Fulminator, and Serenator.5 As the pebble or flint stone was regarded as the symbol of lightning, Jupiter was frequently represented with such a stone in his hand instead of a thunderbolt;6 and in ancient times a flint stone was exhibited as a symbolic representation of the god.7 In concluding a treaty, the Romans took the sacred symbols of Jupiter, viz. the scepter and flint stone, together with some grass from his temple, and the oath taken on such an occasion was expressed by per Jovem Lopidem jurare.8 When the country wanted rain, the help of Jupiter was sought by a sacrifice called aquilicium;9 and respecting the mode of calling down lightning, see Elicius. These powers exercised by the god, and more especially the thunderbolt, which was ever at his command, made him the highest and most powerful among the gods, whence he is ordinarily called the best and most high (optimus maximus), and his temple stood on the capitol; for he, like the Greek Zeus, loved to erect his throne on lofty hills.10

From the capitol, whence he derived the surnames of Capitolinus and Tarpeius, he looked down upon the Forum and the city, and from the Alban and sacred mounts he surveyed the whole of Latium,11 for he was the protector of the city and the surrounding country. As such he was worshiped by the consuls on entering upon their office, and a general returning from a campaign had first of all to offer up his thanks to Jupiter, and it was in honor of Jupiter that the victorious general celebrated his triumph.12 The god himself was therefore designated by the names of Imperator, Victor, Invictus, Stator, Opitulus, Feretrius, Praedator, Triumphator, and the like.13 Under all these surnames the god had temples or statues at Rome; and two temples, viz. those of Jupiter Stator at the Mucian gate and Jupiter Feretrius, were believed to have been built in the time of Romulus.14 The Roman games and the Feriae Latinae were celebrated to him under the names of Capitolinus and Latialis.

Jupiter, according to the belief of the Romans, determined the course of all earthly and human affairs: he foresaw the future, and the events happening in it were the results of his will. He revealed the future to man through signs in the heavens and the flight of birds, which are hence called the messengers of Jupiter, while the god himself is designated as Prodigialis, that is, the disposer of prodigies.15 For the same reason Jupiter was invoked at the beginning of every undertaking, whether sacred or profane, together with Janus, who blessed the beginning itself;16 and rams were sacrificed to Jupiter on the ides of every month by his flamen, while a female lamb and a pig were offered to Juno on the kalends of every month by the wife of the rex sacrorum.17 Another sacrifice, consisting of a ram, was offered to Jupiter in the regia on the nundines, that is, at the beginning of every week;18 and it may be remarked in general that the first day of every period of time both at Rome and in Latium was sacred to Jupiter, and marked by festivals, sacrifices, or libations.

It seems to be only a necessary consequence of what has been already said, that Jupiter was considered as the guardian of law, and as the protector of justice and virtue: he maintained the sanctity of an oath, and presided over all transactions which were based upon faithfulness and justice. Hence Fides was his companion on the capitol, along with Victoria; and hence a traitor to his country, and persons guilty of perjury, were thrown down the Tarpeian rock. Faithfulness is manifested in the internal relations of the state, as well as in its connections with foreign powers, and in both respects Jupiter was regarded as its protector. Hence Jupiter and Juno were the guardians of the bond of marriage; and when the harmony between husband and wife was disturbed, it was restored by Juno, surnamed Conciliatrix or Viriplaca, who had a sanctuary on the Palatine.19 Not only the family, however, but all the political bodies into which the Roman people was divided, such as the gentes and curiae, were under the especial protection of the king and queen of the gods; and so was the whole body of the Roman people, that is, the Roman state itself. The fact of Jupiter being further considered as the watchful guardian of property, is implied in his surname of Hercius (from the ancient herctum, property), and from his being expressly called by Dionysius,20ὅριος Ζεύς, i.e. Jupiter Terminus, or the protector of boundaries, not only of private property, but of the state.

As Jupiter was the prince of light, the white color was sacred to him, white animals were sacrificed to him, his chariot was believed to be drawn by four white horses, his priests wore white caps, and the consuls were attired in white when they offered sacrifices in the capitol the day they entered on their office.21 When the Romans became acquainted with the religion of the Greeks, they naturally identified Jupiter with Zeus, and afterwards with the Egyptian Ammon, and in their representations of the god they likewise adopted the type of the Greek Zeus.22