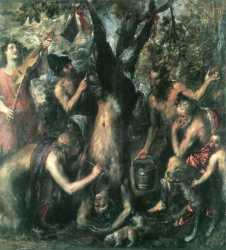 A mythological personage, connected with the earliest period of Greek music. He is variously called the son of Hyagnis, or of Oeagrus, or of Olympus. Some make him a satyr, others a peasant. All agree in placing him in Phrygia. The following is the outline of his story, according to the mythographers.

Athena having, while playing the flute, seen the reflection of herself in water, and observed the distortion of her features, threw away the instrument in disgust. It was picked up by Marsyas, who no sooner began to blow through it than the flute, having once been inspired by the breath of a goddess, emitted of its own accord the most beautiful strains. Elated by his success, Marsyas was rash enough to challenge Apollo to a musical contest, the conditions of which were that the victor should do what he pleased with the vanquished. The Muses, or, according to others, the Nysaeans, were the umpires. Apollo played upon the cithara, and Marsyas upon the flute; and it was not till the former added his voice to the music of his lyre that the contest was decided in his favor.

As a just punishment for the presumption of Marsyas, Apollo bound him to a tree, and flayed him alive. His blood was the source of the river Marsyas, and Apollo hung up his skin in the cave out of which that river flows. His flutes (for, according to some, the instrument on which he played was the double flute) were carried by the river Marsyas into the Maeander, and again emerging in the Asopus, were thrown on land by it in the Sicyonian territory, and were dedicated to Apollo in his temple at Sicyon.

The fable evidently refers to the struggle between the citharoedic and auloedic styles of music, of which the former was connected with the worship of Apollo among the Dorians, and the latter with the orgiastic rites of Cybele in Phrygia. It is easy to apply this explanation to the different parts of the legend; and it may be further illustrated by other traditions respecting Marsyas. He is made by some the inventor of the flute, by others of the double flute.1 By a confusion between the mythical and the historical, the flute-player Olympus is made his son, or by some his father. He is spoken of as a follower of Cybele,2 and he occupies, in fact, the same place in the orgiastic worship of Cybele that Silenus does in the worship of Dionysus: Pausanias3 actually calls him Silenus, and other writers connect him with Dionysus.

The story of Marsyas was often referred to by the lyric and epigrammatic poets,4 and formed a favorite subject for works of art.5 In the fora of ancient cities there was frequently placed a statue of Marsyas, with one hand erect, in token, according to Servius, of the freedom of the state, since Marsyas was a minister of Bacchus, the god of liberty.6 It seems more likely that the statue, standing in the place where justice was administered, was intended to hold forth an example of the severe punishment of arrogant presumption. The statue of Marsyas in the Forum of Rome is well known by the allusions of Horace,7 Juvenal,8 and Martial.9 This statue was the place of assembly for the courtezans of Rome, who used to crown it with chaplets of flowers.10

A famous work by Myron (late sixth century BCE) shows Marsyas picking up the flute after Athena had thrown it away. A bronze statuette of Marsyas in the British Museum may be a copy of Myron's work. Marsyas, a nude, bearded satyr, holds his right hand to his head, the left making a gesture of averting. The torture is depicted in a Hellenic statute: Marsyas is bound by hand and feet to a tree and is awaiting his punishment. He is also portrayed on reliefs, vases, and coins.