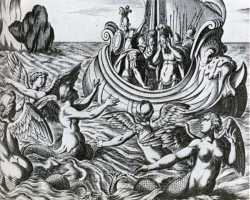 Mythical beings who were believed to have the power of enchanting and charming, by their song, any one who heard them. When Odysseus, in his wanderings through the Mediterranean, came near the island on the lovely beach of which the Sirens were sitting, and endeavoring to allure him and his companions, he, on the advice of Circe, stuffed the ears of his companions with wax, and tied himself to the mast of his vessel, until he was so far off that he could no longer hear their song.1

According to Homer, the island of the Sirens was situated between Aeaea and the rock of Scylla, near the south-western coast of Italy. Homer says nothing of their number, but later writers mention both their names and number some state that they were two, Aglaopheme and Thelxiepeia;2 and others, that there were three, Peisinoë, Aglaope, and Thelxiepeia,3 or Parthenope, Ligeia, and Leucosia.4 They are called daughters of Phorcys,5 of Achelous and Sterope,6 of Terpsichore,7 of Melpomene,8 of Calliope,9 or of Gaea.10

Their place of abode is likewise different in the different traditions, for some place them on cape Pelorum others in the island of Anthemusa, and others again in the Sirenusian islands near Paestum, or in Capreae.11 Latin writers mention their as domicile the Sirenum scopuli, three small, rocky islands between Sorrento and Capri.

The Sirens are also connected with the legends about the Argonauts and the rape of Persephone. When the Argonauts, it is said, passed by the Sirens, the latter began to sing, but in vain, for Orpheus rivaled and surpassed them; and as it had been decreed that they should live only till some one hearing their song should pass by unmoved, they threw themselves into the sea, and were metamorphosed into rocks. Some writers connected the self-destruction of the Sirens with the story of Orpheus and the Argonauts, and others with that of Odysseus.12

Late poets represent them as provided with wings, which they are said to have received at their own request, in order to be able to search after Persephone13 or as a punishment from Demeter for not having assisted Persephone,14 or from Aphrodite, because they wished to remain virgins.15 Once, however, they allowed themselves to be prevailed upon by Hera to enter into a contest with the Muses, and being defeated, they were deprived of their wings.16

There was a temple of the Sirens near Surrentum, and the tomb of Parthenope was believed to be near Neapoli (Naples).17

The adventure of Odysseus and the Sirens is found on a Corinthian aryballos (ca. 570 CE; Boston). Some of the Sirens are here portrayed fully as birds of prey. The usual depiction as large birds with human heads can be found on an Attic vase by the Sirens Painter (ca. 475 BCE; London). Odysseus' ship, with the hero himself tied to the mast, is sailing between two rocks on which Sirens are seated. One of the Sirens plunges herself into the sea because they failed to lure the ship to its doom.