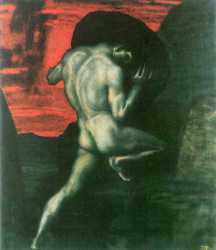 A son of Aeolus and Enarete, whence he is called Aeolides.1 He was accordingly a brother of Cretheus, Athamas, Salmoneus, Deion, Magnes, Perieres, Canace, Alcyone, Peisidice, Calyce and Perimede.2 He was married to Merope, a daughter of Atlas or a Pleiad,3 and became by her the father of Glaucus, Ornytion (or Porphyrion4), Thersandrus, and Halmus.5 In later accounts he is also called a son of Autolycus, and the father of Sinon6 and Odysseus, who is hence called Sisyphides.7 He is said to have built the town of Ephyra, afterwards Corinth,8 though, according to another tradition, Medea, on leaving Corinth, gave him the government of that city.9

As king of Corinth he promoted navigation and commerce, but was fraudulent, avaricious, and altogether of bad character, and his whole house was in as bad repute as he himself.10 He is said to have found the body of Melicertes on the coast of Corinth, to have buried it on the isthmus, and to have founded the Isthmian games in honor of him (see also Ino and Palaemon).11 His wickedness during life was severely punished in the lower world, where he had to roll up hill a huge marble block, which as soon as it reached the top always rolled down again.12

The special reasons for this punishment are not the same in all authors; some say that it was because he had betrayed the designs of the gods,13 others because he attacked travelers, and killed them with a huge block of stone. He was slain, according to some, by Theseus,14 while other traditions relate that Sisyphus lived in enmity with his brother Salmoneus, and consulted the oracle how he might get rid of him. Apollo answered, that if he begot sons by Tyro, the wife of his brother, they would avenge him. Sisyphus indeed became the father of two sons by Tyro, but the mother killed them immediately after their birth. Sisyphus took cruel vengeance on her, and was punished for it in the lower world.15

Another tradition states that when Zeus had carried off Aegina, the daughter of Asopus, from Phlius, Sisyphus betrayed the matter to Asopus, and was rewarded by him with a well on Acrocorinthus, but Zeus punished him in the lower world.16 Others, again, say that Zeus, to avenge his treachery, sent Death to Sisyphus, who, however, succeeded in putting Death into chains, so that no man died until Ares delivered Death, whereupon Sisyphus himself also expired.17

Before he died he desired his wife not to bury him. She having complied with his request, Sisyphus in the lower world complained of his being neglected, and desired Hades, or Persephone, to allow him to return to the upper world to punish his wife. When this request was granted, he refused to return to the lower world, until Hermes carried him off by force; and this piece of treachery is said to be the cause of his punishment.18

He was believed to have been buried on the isthmus, but very few even among his contemporaries knew the exact place.19

Sisyphus is depicted on many Greek vases, either in the nude or wearing a pelt across his shoulders. In the Lesche of Delphi there used to be a painting by Polygnotus (fifth century BCE) which showed him pushing a boulder up a hill.20