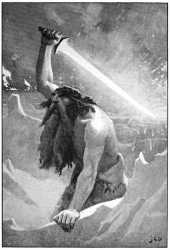 "Black", "Swarthy one." Presumably a jötunn, who will play a role in the cataclysmic events at Ragnarök. He is mentioned in Völuspá:

Surt from the south comes
with flickering flame;
shines from his sword
the Val-god's sun.
The stony hills are dashed together,
the giantesses totter;
men thread the path of Hel,
and heaven is cloven.

According to stanza 53, Freyr, here called "the bright slayer of Beli" shall fight with Surtr. The giant Vafþrúðnir adds that Surtr and his horde shall meet the gods at Vígríðr for the final battle. After Surtr's fire has been quenched, Víðarr and Váli shall inhabit the gods' temples. In Fáfnismál, Sigurðr asks the dying Fáfnir what the isle is called where all the gods and Surtr shall sword-sweat mingle. Fáfnir replies that it is called Óskópnir.

Snorri Sturluson in Gylfaginning places Surtr at the entrance to Múspell:

He who sits there at the land's-end, to defend the land, is called Surtr; he brandishes a flaming sword, and at the end of the world he shall go forth and harry, and overcome all the gods, and burn all the world with fire.

This is further elaborated in his description of Ragnarök, chapter 51:

In this din shall the heaven be cloven, and the Sons of Múspell ride thence: Surtr shall ride first, and both before him and after him burning fire; his sword is exceeding good: from it radiance shines brighter than from the sun; when they ride over Bifröst, then the bridge shall break, as has been told before. [...] Freyr shall contend with Surtr, and a hard encounter shall there be between them before Freyr falls: it is to be his death that he lacks that good sword of his, which he gave to Skírnir. [...] Then straightway shall Surtr cast fire over the earth and burn all the world.

In the Nafnaþulur section of Skáldskaparmál Surtr is a jötunn name.