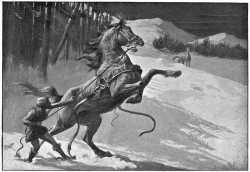 "Unlucky traveler." The stallion that belonged to the nameless giant builder who built the walls of Ásgarðr. According to Gylfaginning, the giant offered to build a citadel to keep out invaders in exchange for the goddess Freyja, as well as the sun and the moon. The gods agreed, but stipulated that he complete the work in a single winter with the aid of no man. The giant asked if his stallion may help him, and Loki advised it, and the petition was granted.

Because of the enormous strength of the horse, the giant made great progress and with only three days left before the deadline, the work had almost reached the gate of the stronghold. The gods blamed Loki and declared that, unless he devised a scheme to cause the builder to forfeit the payment, he would die a horrible death.

That save evening, Loki turned himself into a mare and lured Svaðilfari away into the woods. The giant chased after the stallion but was unable to catch him. As a result, the work was held up and the giant failed to complete the contract. He flew into a rage and the gods saw that that he was one of the hated giants they called for Thor, who smashed the builder's skull with a single blow of his hammer Mjöllnir.

Some time later, Loki the mare gave birth to foal, which was gray and had eight feet; it is the best horse among gods and men, and is called Sleipnir.