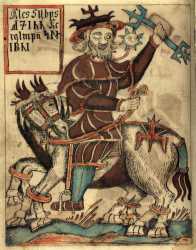 "Slippy." The eight-legged, gray horse of Odin. It is the best of horses according to Grímnismál. In Baldrs draumar Odin saddles Sleipnir and rides into Niflheimr to question a völva about the nature of his son's baleful dreams. The poem Sigrdrífumál states that runes are carved into Sleipnir's teeth.

Snorri Sturluson in Gylfaginning, chapter 15, says that Sleipnir is one of the horses the Æsir ride each day to their tribunal at the Urðarbrunnr, but he is not found in the list of horses of the Æsir in Grímnismál 30.

The origin of Sleipnir is told by Snorri in chapter 42. A giant builder had offered to build a citadel for the gods in exchange for Freyja and the sun and the moon. He asked them if they would allow his horse Svaðilfari to help him, and Loki advised it, and his petition was granted. With the help of the stallion the work progressed rapidly, and when the citadel was nearly completed within the allotted time, the gods began to worry. Since it was Loki who advised them to allow the builder the use of his horse, they ordered him to come up with a plan to delay the construction. Loki changed himself into a mare and lured the stallion away from the site. The absence of his horse caused the builder to fall behind on the work, and he was unable to keep his end of the agreement. He flew into a giant rage, but was dispatched by Thor. Somewhat later Loki gave birth to a foal, which was named Sleipnir.

Loki is also mentioned as the horse's father in Völuspá hin skamma, and a kenning for Loki is Kinsman of Sleipnir.

In chapter 49, the story of Baldr's death, Odin lends the horse to Hermóðr so that he can travel to Hel to ask for Baldr's return. When they came to the Hel-gate, he made the girths fast and pricked the steed with his spurs; the steed leaped so hard over the gate that it came nowhere near to it.

In Skáldskaparmál, chapter 17, Odin rides Sleipnir into Jötunheimr and visits the giant Hrungnir. The giant asks what manner of man he is, wearing a golden helmet, riding through air and water, and says that the stranger has a wondrous good steed. Odin wagers with the giant that there is no horse in Jötunheimr that would prove equally good. Hrungnir agrees that it is a good horse, but that he has a much better paced horse named Gullfaxi. The giant has meanwhile become angry and vaults up onto his horse and gallops after Odin, intending to pay him for his boasting. Odin gallops so furiously that he is on the top of the next hill first, but Hrungnir is so filled with the giant's frenzy that he takes no head until he has come in beyond the gates of Ásgarðr.

Sleipnir also appears in a list of horses enumerated in the Rhymes of Þorgrímr.