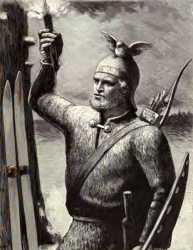 "Glory." The son of Sif, and the stepson of Thor. Ullr is associated with archery, hunting, skating, and skiing, as attested by numerous kennings in skaldic verses. His dwelling-place is Ýdalir. Snorri Sturluson lists him among the Æsir and says that he is so excellent a bowman, and so swift on snowshoes, that none may contend with him. He is also fair of aspect and has the accomplishments of a warrior; it is well to call on him in single-combats. His name is not found in the Nafnaþulur.

In Skáldskaparmál Snorri says that Ullr can be periphrased as Son of Sif, Stepson of Thor, God of the Snowshoe, God of the Bow, Hunting-God, and God of the Shield. A kenning for shield is Ullr's Ship. In Atlakviða, there is a reference to an oath sworn on Ullr's ring.

Literary evidence for Ullr is sparse, but his name appears in several Norwegian and Swedish place names, though none in Denmark or Iceland.

In Saxo Grammaticus' Gesta Danorum, a character named Ollerus (Ullr) replaced Othinus (Odin) after the latter was banished for his rape of Rinda. He flourished for ten years, but was ultimately expelled by the returning Othinus, and killed by the Danes in Sweden.