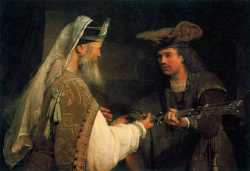 "Brother of anger", "Brother of the king." The son of Ahitub and father of Abiathar.1 He descended from Eli in the line of Ithamar. In 1 Chr. 18:16 he is called Abimelech, and is probably the same as Ahiah.2 He was the twelfth high priest, and officiated at Nob, where he was visited by David (to whom and his companions he gave five loaves of the showbread, as well as Goliath's sword) when he fled from Saul.3

Ahimelech was summoned into Saul's presence, and accused, on the information of Doeg the Edomite, of disloyalty because of his kindness to David; whereupon the king commanded that he, with the other priests who stood beside him, should be put to death. This sentence was carried into execution by Doeg.4

Saul then attacked Nob, the city of priests, and killed all the men, women and children. Ahimelech's son Abiathar escaped and fled to David. Possibly Abiathar had a son also called Ahimelech, or the two names, as some think, may have been accidentally transposed in 2 Sam. 8:17; 1 Chr. 18:16, marg.; 24:3, 6, 31.