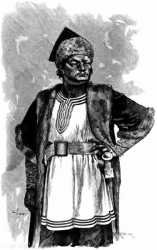 In Völsunga saga, the king of the Huns who married Guðrún after Sigurðr's death. According to the prose section Drap Niflunga, Atli charged the Gjúkungs with being responsible for the death of his sister Brynhildr. By way of reconciliation, it was agreed that Guðrún should be given to him in marriage. Atli invited Guðrún's brothers Gunnarr and Högni to his court and had them treacherously slain.

Guðrún avenged their deaths by killing Atli's sons Erpr and Eitil and serving them to their father at a feast. When the king asked her were his sons were, she told Atli what she had done. Then on a night, when the king had drunken and was asleep, she and the son of Högni went to Atli's room where she thrust her sword through his breast. Guðrún completed her vengeance by setting his hall on fire, and in the confusion Atli's men slew each other.

He corresponds to Etzel in the Nibelungenlied.

For other occurances of the name "Atli", click here.