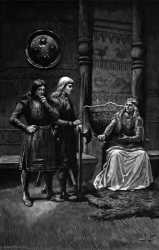 The daughter of the legendary king Gjúki and his wife Grímhildr, and sister of Gunnarr, Högni, Guðný, and Guthormr, Gjúki's stepson. Her life is chronicled in Guðrunarkviða I-III. When Sigurðr tarried at Gjúki's court, her mother, desiring Sigurðr's wealth for her family, gave him a magic draught that made him forget his vows to Brynhildr, and he married Guðrún. They had two children Sigmundr and Svanhildr. Guðrún's brothers Gunnarr and Högni swore oaths of blood brotherhood with him.

After the death of Sigurðr at the hands of Guthormr, Guðrún went to the court of king Hálfr in Denmark, where she spent the next seven years with Hákon's daughter Þóra making embroidery. She too was given a draught of forgetfulness by Grímhildr, because she would otherwise not have agreed to marry Atli, the king of the Huns, and brother of Brynhildr. Her husband invited Högni and Gunnarr to his residence, but Guðrún suspected treachery and sent them word in runes not to come. They came anyway and were captured. She besought Atli's sons Erpr and Eitil to intercede for their lives, but they would not, and both her brothers were killed.

The poem Guðrunarkviða Þriðja, an peripheral episode, describes how a serving woman and former concubine of Atli, named Herkia, tells him that she has seen Guðrún and Thjódrek together. Atli becomes furious and accuses her of adultery, but Guðrún claims that nothing has happened between them. To prove her innocence she plunges her hand in a boiling cauldron and drew up the precious stones from the bottom. Alti beheld her unscathed hand and was much relieved, and ordered Herkia to go through the same ordeal, but her hand was burnt and she was exiled.

In Atlakviða Guðrún avenged her brothers' deaths by killing Erpr and Eitil and serving the flesh to Atli at a feast. She then reveals to him what she has done, and sets fire to his hall, and he perishes in the flames. Snorri Sturluson describes it in Skáldskaparmál:

A little while after, Gudrún slew her two sons, and caused flagons to be made of their skulls, set with gold and silver. Then the funeral-feast was held for the Niflungs; and at this feast Gudrún had mead poured into the flagons for King Atli, and the mead was mixed with the blood of the boys. Moreover, she caused their hearts to be roasted and set before the king, that he might eat of them. And when he had eaten, then she herself told him what she had done, with many scathing words. There was no lack of strong drink there, so that most of the company had fallen asleep where they sat. That night she went to the king while he slept, and Högni's son with her; they smote the king, and that was the death of him. Then they set fire to the hall, and burned the folk that were within.

After Atli's death she goes to the seashore and tries to drown herself, but she could not sink. She was borne across the sea to the land of King Jónakr, who marries her. Their sons were Sörli, Erpr, and Hamðir. Svanhildr, her daughter with Sigurðr, grew up at his court. She was given in marriage to Jörmunrekkr, who later has her killed. The eddic poems Hamðismál and Guðrúnarhvöt describe how Guðrún avenges Svanhildr's death through her sons Sörli and Hamðir.

In the Nibelungenlied she appears as Kriemhild and as Gutrune in Wagner's Der Ring des Nibelungen. In the German tradition, Guðrún did not marry Atli (or Ezel) until after the death of Herkia (Helche, Erka).