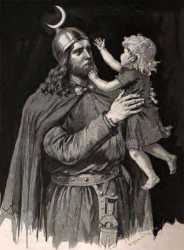 Some time later, Guðrun revealed to Brynhildr that it was not Gunnarr who had ridden to the flames to woo her, but Sigurðr in the shape of Gunnarr. Brynhildr was furious at the betrayal, and incited Gunnarr and Högni to slay Sigurðr, but because they were Sigurðr's blood-brothers, they stirred up Guthormr, their half-brother, to do the deed. After Sigurðr's death, Brynhildr took her own life.

Atli, the king of the Huns, and brother of Brynhildr, blamed the Gjúkings for her death. He invited them to his lands, but met them with an army and the two brothers were made captive. Atli had Högni's heart cut out, and that was the end of him.