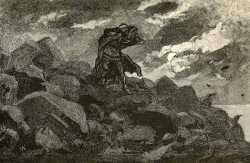 One of Arthur's primary companions in Welsh literature, second in prominence only to Cai (Kay). His name is mentioned in poetry, Culhwch ac Olwen, the triads and the life of Saint Cadoc. He is described as valiant, skilled with a spear, and handsome. Geoffrey changes his name to the more familiar spelling and brings him into full medieval knighthood. He is made cup-bearer to the King and governor of Normandy. Along with Arthur and Kay, he mounts an assault on a giant inhabiting Mont Saint Michel. After falling in combat with the Romans he is buried in Bayeux, a city founded by an ancestor with the same name, according to Geoffrey.

Most romancers tend to diminish his significance, though in England he has the memorable role as the last knight attendant to the dying king. He is the one who casts Excalibur into the water, is witness to Arthur's supernatural departure and retires to a Glastonbury hermitage to end his days.