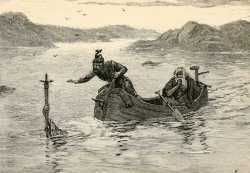 Arthur. The name conjures mystical images and ideals to this day. This is evident by his continued presence in popular culture since his inception. Why exactly does the history of a fifth-seventh Celtic Briton chieftain and the legend that grew up around him still fire our collective imaginations today?

To many, it is the allure of the "brief, shining moment" when the timeless ideals of chivalry were upheld and embodied as literature in ofttimes strange and beautiful prose, film and music. Perchance it is the eternal nature of the struggle and the promise of an eventual return scribed therein that still speaks to the heart or maybe it is the fact that these very human characters feel and think in the way we do now. Others are drawn to the mystical and magical elements, both Celtic and Christian, of legends like the Sword in the Stone, characters like the Lady of the Lake and noble endeavors like the Quest for the Holy Grail. Finally, to some, it is the eternal mystery, the fact that we may never know the truth about the King and his Knights of the Round Table, that drives them to forge on in study.

The names are known — Merlin, Guinevere, Lancelot, Galahad, Excalibur, etc. Misconceptions and multiplicities abound. There are no exact answers. There are conglomerate characters, impossible timelines and wondrous exaggerations throughout. Every author that has ever wrapped his or her words around the legends has manipulated them to often very strange ends. No two books or scholars ever seem to agree. Nationalistic agendas abound. Yet the subject still retains its inherent fascination. There is a never ending wellspring of modern thoughts and ideas on the subject that proves the study of Arthuriana can be an all-encompassing one.

At the Encyclopaedia Mythica, we will endeavor to present current scholarship on Arthurian matters that deals with the historical and archaeological aspects of the field in addition to the literature that formed the legend — from the Welsh triads to Sir Thomas Malory. This delineation is made out of necessity for the amount of modern Arthurian fiction is simply too great and all are, to some extent, derivations of the themes set down in the Middle Ages.