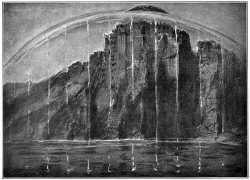 It is of three colors, and very strong, and made with cunning and with more magic art than other works of craftsmanship. But strong as it is, yet must it be broken, when the sons of Múspell shall go forth harrying and ride it, and swim their horses over great rivers; thus they shall proceed.

He adds that each day the gods ride over the rainbow bride to the Urðarbrunnr to hold their tribunal, and that another name for it is Ásabrú or Asbrú, "Bridge of the Æsir."

Bifröst is the only way for the giants, the perennial enemies of the gods, to enter Ásgarðr, hence it is closely guarded by Heimdallr, who stands at the upper end of the bridge, at Himinbjörg. The red in the bow is burning fire, intended to keep the giants out. Yet in several tales, giants have easily entered into Ásgarðr, among whom Skaði and Hrungnir.

Bifröst is described as the best of bridges in Grímnismál.