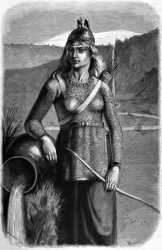 The daughter of the jötunn Þjazi. In Skáldskaparmál it is told how she went to Ásgarðr to avenge her father's death, but is offered compensation by the Æsir:

The Æsir, however, offered her reconciliation and atonement: the first article was that she should choose for herself a husband from among the Æsir and choose by the feet only, seeing no more of him. Then she saw the feet of one man, passing fair, and said: "I choose this one: in Baldr little can be loathly." But that was Njördr of Nóatún. She had this article also in her bond of reconciliation: that the Æsir must do a thing she thought they would not be able to accomplish: to make her laugh. Then Loki did this: he tied a cord to the beard of a goat, the other end being about his own genitals, and each gave way in turn, and each of the two screeched loudly; then Loki let himself fall onto Skadi's knee, and she laughed. Thereupon reconciliation was made with her on the part of the Æsir. It is so said, that Odin did this by way of atonement to Skadi: he took Thjazi's eyes and cast them up into the heavens, and made of them two stars.

In Lokasenna, Loki says that he was first and foremost among those who slew her father, and then claims that she invited him to her bed, although he accuses all the goddesses present of having taken lovers. It was Skaði who fastened a venomous serpent over the bound Loki so that venom should drip from the serpent onto his face.

Snorri Sturluson in Gylfaginning says that her marriage to Njörðr was not a happy one. She wished to return to her mountain-halls at Þrymheimr, which she had inherited from her father, while he preferred to remain at his seaside home of Nóatún. They make a compact on these terms: they would spend nine nights in one place, then the next nine in the other. When they returned from Þrymheimr to Nóatún, Skaði sang this lay:

Sleep could I never on the sea-beds,
For the wailing of waterfowl;
He wakens me, who comes from the deep—
The sea-mew every morn.

So Skaði returned to the hills, where she became associated with skiing, archery, and hunting. Snorri writes that she goes for the more part on snowshoes and is called Snowshoe-Goddess or Lady of the Snowshoes. According to a stanza from Eyvindr skáldaspillir's Háleygjatal, preserved in Ynglinga saga, Skaði afterwards married Odin and had many sons by him. One of these sons was Sæmingr.

It is unknown if she is also the mother of Freyr and Freyja. In the first stanza of Skírnismal she refers to Freyr as "our son" and in Lokasenna all four are present at Ægir's feast. Elsewhere it is stated that Njörðr had Freyr and Freyja after Skaði had left him or that he had them by his own sister.