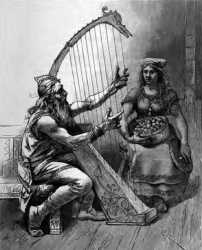 "Lord", "Poetry." One of the Æsir, the god of poetry, eloquence, and music. He is called the "best of skalds" in Grímnismál, stanza 44. Bragi's wife is Iðunn. A kenning in Skáldskaparmál calls him a son of Odin; his mother is not named.

Bragi is one of the later figures among the gods and is mentioned only a few times in the Poetic Edda, but in Snorri Sturluson's Prose Edda he is of greater importance. Snorri describes him in Gylfaginning as follows:

One is called Bragi: he is renowned for wisdom, and most of all for fluency of speech and skill with words. He knows most of skaldship, and after him skaldship is called bragr, and from his name that one is called bragr-man or -woman, who possesses eloquence surpassing others, of women or of men.

After this he only reappears in Skáldskaparmál. When Ægir journeyed to Ásgarðr, he was given a hospitable welcome by the Æsir. At night, they held a sumptuous banquet and all the Æsir came. The man seated next to Ægir was Bragi, and they took part together in drinking and in converse. Bragi told their guest of the many things which had come to pass among the Æsir, beginning with the origin of the mead of poetry.

In the eddic poem Lokasenna, the gods pay a return visit to Ægir. When Loki kills Ægir's servant Fimafeng, he is cast out but later returns. Bragi says to him that he shall never have place among them. Loki calls upon Odin and reminds him of how in the early days they blended their blood together. Odin invites Loki to join them at their compotation and tells Víðarr to pour Loki a drink. Loki then addresses the guests:

11. Hail, Æsir!
Hail, Asyniur!
And ye, all-holy gods!
all, save that one As,
who sits within there,
Bragi, on yonder bench.

Bragi
12. A horse and falchion
I from my stores will give thee,
and also with a ring reward thee,
if thou the Æsir wilt not
requite with malice.
Provoke not the gods against thee.

Loki
13. Of horse and rings
wilt thou ever, Bragi!
be in want.
Of the Æsir and the Alfar,
that are here present,
in conflict thou art the most backward,
and in the play of darts most timid.

Bragi
14. I know that were I without,
as I am now within,
the hall of Ægir,
I thy head would
bear in my hand,
and so for lying punish thee.

Loki
15. Valiant on thy seat art thou, Bragi!
but so thou shouldst not be,
Bragi, the bench's pride!
Go and fight,
if thou art angry;
a brave man sits not considering.

This supposed cowardice is not mentioned elsewhere, and Loki's accusations are in line with what he says about the other gods.

The eddic poem Sigrdrífumál says that runes were carved various things and objects, among which Árvakr's ear and Alsviðr's hoof, on Sleipnir's teeth, on Gungnir's point, and also on Bragi's tongue. These were then shaved off and mixed with the sacred mead, and sent away: they are with the Æsir, with the álfar, some with the wise Vanir, and some with human beings. Those are bók runes, bjarg runes, öl runes, and megin runes.

Snorri says that Bragi can periphrased as Husband of Iðunn, First Maker of Poetry, and The Long Bearded God, and Son of Odin.

Bragi is perhaps identical with the Norwegian court poet Brag Boddason, reckoned to be the first skaldic poet.