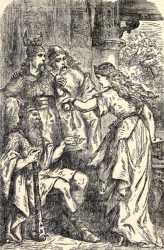 "Rejuventator." A Norse goddess, the wife of Bragi. According to Snorri Sturluson she is custodian of the eski, a chest made of ash wood, which contains those apples which the gods must eat whenever they grow old; and then they all become young.

The skaldic poem Haustlöng, composed by Þjóðólfr of Hvini, calls her the "maiden who understood the eternal life of the Æsir," but does not mention the apples; they seem to be Snorri's addition. In his retelling of Haustlöng in Skáldskaparmál, Snorri says that Loki was threatened by Þjazi with certain death unless he would give him his oath to induce Iðunn to come out of Ásgarðr with her apples, and Loki assented. At the appointed time Loki lured Iðunn into a certain wood, saying that he had found such apples as would seem to her of great virtue, and advised her to bring her own apples to compare them with these. Þjazi came there in his eagle's plumage, took Iðunn, and flew away with her to his abode Þrymheimr.

During Iðunn's absence, the Æsir begin to grow old and gray, and took council together. When it was discovered that Loki was the last one to have seen her, they seized him and threatened him with death, or tortures. Loki declared that he would seek out Iðunn in Jötunheimr, borrows from Freyja her "falcon shape" and flies to Þjazi's home. Upon his arrival he finds that Þjazi is out at sea in a boat and that Iðunn is at home alone. He transforms her into the shape of a nut and grasps her in his claws, and flies away with her as fast as he can. When Þjazi discovers that Iðunn is gone, he takes his eagle's plumage and chases Loki all the way to Ásgarðr, where he is killed by the Æsir.

In Skírnismál, stanza 19, Skírnir offers eleven apples to the giantess Gerðr if she would love Freyr, but it is uncertain whether these are Iðunn's golden apples.

In the Poetic Edda Iðunn is mentioned by name in Lokasenna only. She attempts to intervene between Loki and Bragi, and Loki accuses her of having slept with her brother's slayer. However, neither the brother nor his killer are accounted for in other sources.

Iðunn is not listed among the sixteen Ásynjur in Gylfaginning, but is included among them in the first chapter of Skáldskaparmál, where the gods and goddesses went to Ægir's feast, and in the Nafnaþulur.

A kenning for Bragi is Husband of Iðunn. She herself is periphrased as Wife of Bragi, Keeper of the Apples, and Spoil of the Giant Þjazi. Her apples are called Age-Elixer of the Æsir.