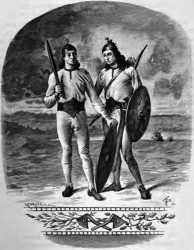 "Wide-ruler?" The son of Odin, according to Völuspá and the þulur. Snorri Sturluson adds that the giantess Gríðr is his mother. He describes him briefly in Gylfaginning, chapter 29:

Vídarr is the name of one, the silent god. He has a thick shoe. He is nearly as strong as Thor; in him the gods have great trust in all struggles.

The nature of Víðarr's silence remains unexplained. He appears in mythology primarily as the avenger of his father's death. At Ragnarök the wolf Fenrir shall kill Odin, whereupon Víðarr slays the wolf with his sword, according to Völuspá:

Then comes the great
victor-sire's son,
Vidar, to fight
with the deadly beast.
He with his hands
will make his sword pierce
to the heart of the giant's son:
then avenges he his father.

However, the manner of Fenrir's death is different in Vafþrúðnismál, stanza 53, which states that Víðarr shall tear apart the terrible jaws and so shall slay the wolf. This is further elaborated by Snorri in Gylfaginning, 51:

The wolf swallows Odin, but at that instant Vidar advances, and setting his foot on the monster's lower jaw, seizes the other with his hand, and thus tears and rends him till he dies. Vidar is able to do this because he wears those shoes for which stuff has been gathering in all ages, namely, the shreds of leather which are cut off to form the toes and heels of shoes, and it is on this account that those who would render a service to the Æsir should take care to throw such shreds away.

After the cataclysmic events of Ragnarök, Víðarr will be among the survivors. The giant Vafþrúðnir says that Víðarr and Váli shall inhabit the holy places of the gods when the fires of Surtr have been quenched. Snorri adds that neither sea nor the fire of Surtr shall have harmed them.

Víðarr was one of the Æsir present at the banquet in honor of Ægir. In Lokasenna he is only mentioned as presenting Loki a drink and escapes Loki's flyting of the gods. Víðarr's home is called Viði.

In Skáldskaparmál Víðarr is periphrased as the Silent God, Possessor of the Iron Shoe, Foe and Slayer of Fenris-Wolf, Avenger of the Gods, Divine Dweller in the Homesteads of the Father, Son of Odin, and Brother of the Æsir.