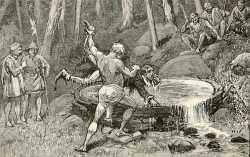 A foolish knight from the French Vulgate Lancelot. In Mallory's Le Morte d'Arthur he is called the fool of King Arthur, and was knighted by the king himself.

"I remember at Mile-End Green, when I lay at Clement's Inn, I was then Sir Dagonet in Arthur's show." - Henry IV., iii. 2. (Justice Shallow).