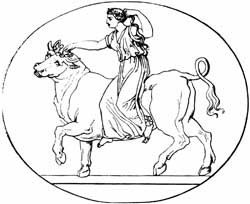 According to the Iliad,1 a daughter of Phoenix, but according to the common tradition a daughter of Agenor, and the beloved of Zeus. Zeus took the form of a beautiful white bull and encountered Europa and her friends at the seashore of Phoenicia. By appearing to be very tame, he coaxed her to climb onto his back and then swam off with her across the sea to Crete. There, she bore him three sons — Minos, Sarpedon and Rhadamanthys. Zeus also gave her three gifts: the bronze man, Talos, to act as her guardian; a dog, Laelaps, which never failed of its quarry; and a javelin which never missed its mark.

After his daughter had been carried off by Zeus, Agenor sent out his sons Cadmus, Phoenix, Cilix, Thasus, and Phineus in search of her, and enjoined them not to return without their sister. As Europa was not to be found, none of them returned, and all settled in foreign countries.2

Europa afterward married the Cretan king Asterion. She was venerated under the surname of Hellotia in Crete.

Europe, as a part of the world, was believed to have received its name from this fabulous Phoenician princess.3

The abduction of Europa is depicted on various Greek vases, among which one from Aegina (ca. 500 BCE) at Munich, on an archaic relief from the temple at Selinus, a metope from the treasury of Sicyonians (mid-sixth century BCE), and on several murals, such as a Pompeian fresco at the Museo Nazionale at Naples. It has also been a subject for painters such as Veronese and Peter Lely.

For other occurances of the name "Europa", click here.