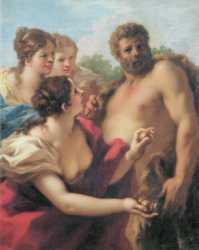 "Daughters of Evening." The famous guardians of the golden apples which Gaea had given to Hera at her marriage with Zeus. Their names are Aegle, Erytheia, Hestia or Hesperia, and Arethusa, but their descent is not the same in the different traditions; sometimes they are called the daughters of Nyx or Erebus,1 sometimes of Phorcys and Ceto,2 sometimes of Atlas and Hesperis, whence their names Atlantides or Hesperides,3 and sometimes of Hesperus, or of Zeus and Themis.4

Instead of the four Hesperides mentioned above, some traditions know only of three, viz. Hespere, Erytheis, and Aegle, Arethusa, and Hesperusa or Hesperia;5 whereas others mention seven.6

The poets describe them as possessed of the power of sweet song.7 In the earliest legends, these nymphs are described as living on the river Oceanus, in the extreme west;8 but the later attempts to fix their abodes, and the geographical position of their gardens, have led poets and geographers to different parts of Libya, as in the neighborhood of Cyrene, Mount Atlas, or the islands on the western coast of Libya,9 or even to the northern extremity of the earth, beyond the wind Boreas, among the Hyperboreans.

In their watch over the golden apples they were assisted or superintended by the dragon Ladon. The apples themselves were obtained by Heracles as the eleventh of his Twelve Labors (see Apples of the Hesperides); they were given to Athena, who restored them to their former place.

Many poets name the place where the golden apples grew the "Garden of the Hesperides." Shakespeare speaks of "climbing trees in the Hesperides" (Love's Labour Lost, IV, iii).