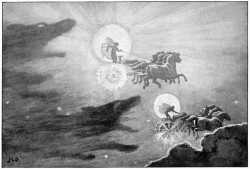 "Moon." The moon personified, the son of Mundilfari and the brother of Sól, the sun, according to Vafþrúðnismál. The siblings journey across the heaven each day to count years for men.

Snorri Sturluson in Gylfaginning says that Mundilfari had two children who were so beautiful that he named his son Moon and his daughter Sun. The gods were incensed at that insolence, and took the brother and sister and set them up in the heavens. Máni steers the course of the moon, and determines its waxing and waning. He took from earth two children, Bil and Hjúki, and they follow him through the heavens.

Máni is pursued across the sky by the wolf Hati Hróðvitnisson, who is eager to seize him. However, in the same chapter Snorri says that at the time of Ragnarök the moon shall be swallowed by Mánagarmr, the Moon-hound.

The eddic poem Alvíssmál contains a number of poetic circumlocutions, or kennings, for the moon. Thor asks Alvíss what the moon is called in each and every world, and the dwarf replies:

In Reginsmál, a kenning for the sun is Sister of Máni.

For other occurances of the name "Máni", click here.