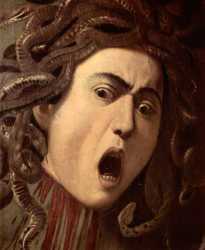 "Queen." The most famous of the Gorgons. Medusa, who alone of her sisters was mortal, was, according to some legends, at first a beautiful maiden, but her hair was changed into serpents by Athena, in consequence of her having become by Poseidon the mother of Chrysaor and Pegasus, in one of Athena's temples.1 Her head was now of so fearful an appearance, that every one who looked at it was changed into stone. Hence the great difficulty which Perseus had in killing her; and Athena afterwards placed the head in the center of her shield or breastplate.

There was a tradition at Athens that the head of Medusa was buried under a mound in the Agora.2 Athena gave to Heracles a lock of Medusa (concealed in an urn), for it had a similar effect upon the beholder as the head itself. When Heracles went out against Lacedaemon he gave the lock of hair to Sterope, the daughter of Cepheus, as a protection of the town of Tegea, as the sight of it would put the enemy to flight.3

Usually, Chrysaor and Pegasus are said to have sprung forth from her body when Perseus decapitated her, because at that time she was pregnant by Poseidon.

One of the metopes of the temple C at Selinus shows Perseus cutting off Medusa's head. She has a large, fanged mouth and a portruding tongue. The horse Pegagus, born from her blood, is held in her right hand (early sixth century BCE). Later representations of Medusa's head are less horrendous, such as the Medusa Rondanini at Munich, eventhough her head is surrounded by snakes; small wings emerge from her hair.

For other occurances of the name "Medusa", click here.